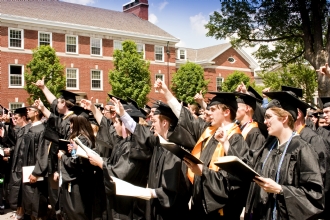 March 15, 2011, Greencastle, Ind. — For a tenth consecutive year, DePauw University will produce a limited edition DVD of its commencement ceremonies, providing a permanent keepsake of the special day for members of the Class of 2011 and their families. Orders are now being accepted at $19.95 for the first disc; additional discs sent to the same address will be $8 each (7% sales tax will be added to Indiana orders). An online order form is available here (a limited number of copies of the 2002-10 commencements are also available).

In addition to the multi-camera production of the commencement ceremony (and video of each individual graduate crossing the stage to receive their diploma), the disc will include an array of special features.  They will include: campus highlights of the past four years (from the class' arrival on campus in August 2007 to clips from key events, including the appointment of President Brian Casey, and Ubben Lecturers such a 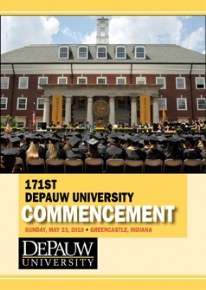 s Tony Blair and the Howard Dean-Karl Rove debate; "Monon Memories" of the last four football battles with Wabash College for the prized Monon Bell; a photo gallery of commencement day activitie; and a recently restored 1941 admission film from the DePauw Archives. (at right: front cover of the 2010 commencement DVD)

The 172nd commencement ceremony will take place on Sunday, May 22, at 1 p.m. (EDT) in Holton Memorial Quadrangle. Theodore M. "Tim" Solso, chairman and chief executive officer of Cummins Inc. and 1969 graduate of DePauw, will deliver the principal address to graduates.  The disc, which is professionally replicated, typically ships by mid-June.

As in past years, the DVD's menu will allow you to quickly access the spot in the program you want to see. If you're looking for a graduate whose last name is Charles, for instance, you click on the letter 'C' in the menu, you're immediately taken to the first person whose last name begins with the letter 'C' receiving his or 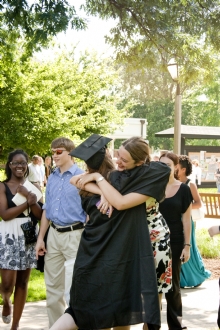 her diploma. Users can also jump to specific speeches, or watch the program from beginning to end.

This will mark the twenty-sixth DVD that DePauw has produced -- including the last 11 Monon Bell Classics, some of which remain available here (supplies are very limited of the 2002, 2007 and 2008 DVDs).

"In 2002, when DePauw first produced a commencement DVD, it was among the first colleges in the nation to do so," says Ken Owen '82, executive director of media relations and supervisor of the project. "The disc has become something that many graduates and their parents look forward to receiving and revisiting as time goes by.  I've overheard older alums say, 'I wish they had these when I graduated.'  It's truly something that is designed to be enjoyed for years to come."