March 16, 2011, Greencastle, Ind. — A Chronicle of Higher Education story examining issues some college educators are encountering with iPads notes, "Michael Vasey, sales manager at DyKnow, says it is tracking new tablets but is hesitant to start adapting its Windows-based program to the newer formats."  Vasey, a 2003 graduate of DePauw University, says, "We're waiting for that killer device to come out. If there was a clear leader that was doing this, it would make it more compelling."

Ben Wieder writes, "Despite the iPad's popularity -- Apple has sold nearly 15 million of them and just came out with the iPad2; and there are dozens of competitors, like the Samsung Galaxy -- early studies indicate that these finger-based tablets are passive devices that have limited use in higher education. They are great for viewing media and allow students to share readings. But professors cannot use them to mark up material on the fly and show changes to students in response to their questions, a type of interactivity that has been a major thrust in pedagogy."

The text adds, "DyKnow, an educational-software company, makes a program that is often paired with tablet PC's. Functioning 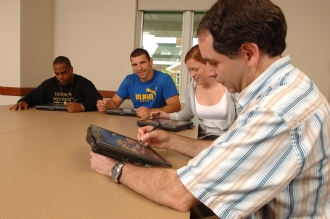 as a virtual, interactive whiteboard, it allows professors to mark up lecture material, share it with students, and accept and display in-class work from them, the company says.

Work at DePauw by Dave Berque, professor of computer science, led to the development of DyKnow's pen-based technology. Dr. Berque received the 2007 Mira Techpoint Award for "Education Contribution in Technology - Individual"  for his efforts to create the software. Learn more about the professor in this article.