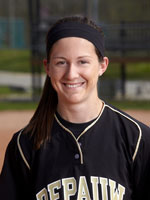 Minx helped lead the Tigers to two wins over Webster as DePauw opened up its 2011 season.

Minx went 4-of-6 including a double and a grand slam, two runs scored and six RBI. She posted a .667 batting average, 1.333 slugging percentage and a .571 on base percentage.  Minx also had a perfect game in the field with no errors in seven chances.

The Tigers travel to Manchester today for a 3:30 p.m. doubleheader.