Ed Garnes '99 is Atlanta's 'Motivator of the Year' 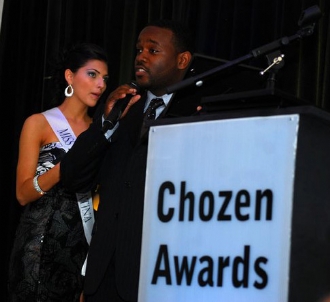 April 4, 2011, Greencastle, Ind. — Edward M. Garnes Jr., a 1999 graduate of DePauw University, is the 2011 recipient of the Chozen Award for "Motivator of the Year."  Created in 2008 by Chozen Media, an Atlanta-based multimedia company, the Chozen Awards are designed to inspire, impact and empower the Greater Atlanta community in honor of the city's unsung heroes. Nominees are selected in 15 categories in the areas of business, entertainment, health, hospitality and the arts and are voted on by the public. (photo: Garnes is seen accepting the award at the March 30 ceremony)

Garnes is the founder of From Afros to Shelltoes, a grass roots community-based organization focused on cultural productions that bridge generation gaps between youth, elders, and the hip hop community. It focuses on using art as a tool of empowerment.

Learn more here, or in this previous story.