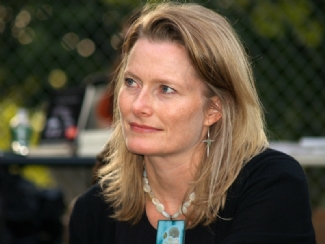 April 18, 2011, Greencastle, Ind. — Author Jennifer Egan, who will visit DePauw University in nine days, was announced this afternoon as the winner of the 2011 Pulitzer Prize for Fiction for her book, A Visit From the Goon Squad. It's the second major honor for the work, which was announced as the winner of the National Book Critics Circle Award for fiction last month.

The Pulitzer committee calls Egan's novel "an inventive investigation of growing up and growing old in the digital age, displaying a big-hearted curiosity about cultural change at warp speed."

Egan also authored Look at Me, a finalist for the National Book Award in fiction in 2001, as well as  The Keep, Emerald City and Other Stories, and The Invisible Circus.

A full list of Pulitzer Prize winners may be accessed here.

Egan's April 27 reading at DePauw is sponsored by the James and Marilou Kelly Writers Series. The program will begin at 7:30 p.m. in Meharry Hall of historic East College and is free and open to the public. Details can be found in this recent story.