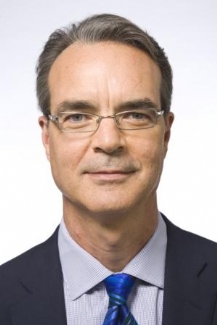 April 25, 2011, Greencastle, Ind. —  "James B. Stewart's engrossing new book," Tangled Webs: How False Statements Are Undermining America: From Martha Stewart to Bernie Madoff, "is an extraordinary forensic analysis of the high-stakes American liar," according to a Business Week review. Stewart is a Pulitzer Prize-winning journalist and 1973 graduate of DePauw University. Tangled Webs was released last week.

"Stewart's CV already includes two masterworks about executive-suite hubris: DisneyWar and Den of Thieves," writes David Kamp. Stewart's new book examines the high-profile cases of Martha Stewart, Lewis "Scooter" Libby, Barry Bonds and Bernard Madoff. "In Stewart's view, these stories are proof that we're living through a sustained bull market for liars, and 'that the broad public commitment to telling the truth under oath has been breaking down, eroding over recent decades.' Current headlines suggest he's on to something."

The review adds, "Much will be made of the

bombshells contained within Tangled Webs -- particularly Stewart's contention that Karl Rove lied to President George W. Bush when asked if he was a source for the Robert Novak column that outed Plame ... The book is most impressive, however, on the granular level. Drawing upon transcripts of grand jury testimony and notes taken by FBI agents and other federal investigators -- information unsealed in the course of judicial proceedings or through the author's own Freedom of Information Act requests -- Stewart is able to get up close to his protagonists to provide, he says, 'a rare look at the very moment these people made the fateful choice to lie.' This is tweezer journalism at its finest." 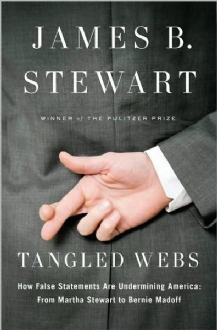 A former Page One editor at the Wall Street Journal, Stewart won a Pulitzer Prize in 1988 for his reporting on the stock market crash and insider trading. He is a regular contributor to SmartMoney and the New Yorker. His previous books also include Blood Sport and Blind Eye. An opera based on Stewart's best-selling 2002 book, Heart of a Soldier: A Story of Love, Heroism, and September 11th, will have its world premiere on September 10, 2011, at the San Francisco Opera.

A member of DePauw's Board of Trustees and former chair of the group, James B. Stewart was the 2006 recipient of the Loeb Award, the highest honor in business journalism. He received DePauw's Young Alumni Award in 1988, an Alumni Citation in 1988, an honorary Doctor of Journalism degree in 1989, and the Old Gold Goblet in 2009.