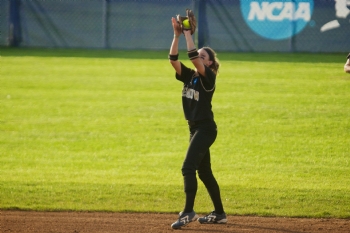 May 22, 2011, Greencastle, Ind. — Coming off of yesterday's 11-3 loss to Christopher Newport, 16th-ranked DePauw takes on eighth-ranked SUNY Cortland this afternoon in an elimination game of the NCAA Division III Softball Championship Finals.

First pitch from the James I. Moyer Sports Complex in Salem, Va., is scheduled for 2:30 p.m.

Live video and stats available through links at NCAA.com. A complete set of DePauw game notes is available as well.

In preparation for the Finals, DePauw was featured by NCAA.com with this feature story.