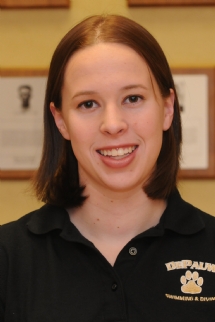 April 27, 2011, Greencastle, Ind. — Catherine "Catie" M. Baker, a junior at DePauw University, is the recipient of a 2011 award from the Barry M. Goldwater Scholarship and Excellence in Education Program. The Goldwater Scholarship is the premiere undergraduate science and mathematics award in the United States. The scholarship program was designed to foster and encourage outstanding students to pursue careers in the fields of mathematics, the natural sciences and engineering.

"I'm really proud of Catie," says Khadija J. Stewart, assistant professor of computer science and DePauw's Goldwater faculty adviser. "Not only is the award extremely important to Catie, it’s important to DePauw -- to be able to 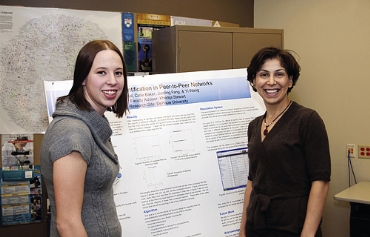 compete with other schools that receive it." (at right: Baker with Dr. Stewart)

Baker recently received DePauw's Wiley Condit Computer Science Award for an outstanding junior in the department and was nominated to Phi Beta Kappa.

A computer science and mathematics double major, Baker also recently received DePauw’s Wiley Condit Computer Science Award for an outstanding junior in the department. This spring she was nominated to Phi Beta Kappa and was accepted into Mortar Board, an honor society based on scholarship, leadership and service. She's the head tutor in the computer science lab, a first-year mentor, president of Delta Gamma sorority and co-chair of Women in Computer Science, and a member of the DePauw women's swimming team.

Baker's summer plans involve going to Washington, D.C. as recipient of a summer undergraduate research fellowship from the National Institute of Standards and Technology.

Before coming to DePauw, Baker hadn't taken a computer science class. "I love logic -- being able to apply different rules in different ways to get results,' she says. "I love problem solving, which is a lot of what 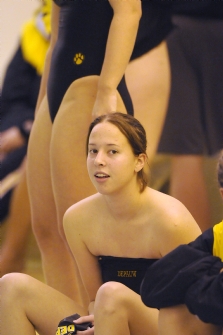 computer science is. I know what I want to do and what parts I need, but how do I put it all together to make the correct outcome. I like puzzles and figuring out how things work."

The Barry M. Goldwater Scholarship provides up to $7,500 per year for educational expenses to sophomores and juniors who intend to pursue careers in mathematics, the natural sciences, or engineering. The Goldwater Foundation seeks students in mathematics or the sciences, display intellectual curiosity and intensity; and possess potential for significant future contributions in their chosen field.