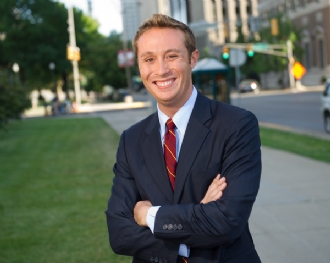 June 12, 2011, Greencastle, Ind. — "Republicans have five more races to fill, after Friday's announcement that AJ Feeney-Ruiz will challenge Democrat Vop Osili for an open seat in District 15," reports the Indianapolis Star. Chris Sikich reports, "Feeney-Ruiz is the deputy chief of staff and spokesman for Secretary of State Charlie White" and is a 2004 graduate of DePauw University.

"It’s time to provide a real voice for all voters new and old living downtown," says Feeney-Ruiz, who is completing work on an M.B.A. from Indiana University's Kelley School of Business and a law degree from IU. "There are thousands of new residents that have made this district their home in the last few years, and thousands more who have lived without the representation they expect, deserve, can depend upon or can be proud of. I’m running to give all of us a real opportunity to be heard and counted."

According to an announcement, "Feeney-Ruiz’s top priorities in the council will be to cultivate public-private partnerships that build and strengthen neighborhoods outside of the immediate downtown area. He believes stronger neighborhoods are better equipped to fight crime, blight, and unite to advocate common sense reforms and improvements within the community."

"AJ represents both the past and future of downtown Indianapolis," Marion County Republican Chairman Kyle Walker states. "As an active member of the community dating back to his early youth, he is a visible and accessible face within the district. As a young professional and leader, he is well positioned to work with all residents in the heart of the city."

Learn more about AJ Feeney-Ruiz in this previous story.