Prof. Wallace Graves, Who Became President of U of Evansville, Dies at Age 89 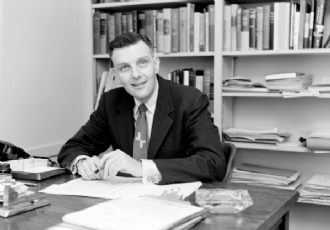 August 18, 2011, Greencastle, Ind. — Wallace B. Graves, a professor of political science at DePauw University from 1950 to 1958 who later became president of the University of Evansville, passed away last night.  He was 89 years old. (at left: Professor Graves in his DePauw office in 1952)

A story in the May 2, 1958 edition of The DePauw announced that Dr. Graves was leaving the University.  It called Graves "one of DePauw's most popular professors" and "one of the best liked and most respected" members of the faculty, noting that he earned the Brown Derby award for top professor in 1954.

Dr. Graves served as the chairman of the North American Council of the International Association of University Presidents, the Indiana Conference of Higher Education, the Independent Colleges and Universities of Indiana, and the Carl Duisberg Society.

Read more at the website of the Evansville Courier & Press.