[Download Video: "All is Possible" - 1510kb] "On this first day, I hereby, and officially, give you permission -- right now -- to work with this faculty and this college to make this world as big as you can," DePauw University President Brian W. Casey told the 612 new students who arrived on campus today. "The slate is clean. The day is young. Open your eyes, you never know what you will see. Open your ears because music is about to play. Open your mind because at this moment, at this very moment, all is possible. "

Dr. Casey addressed the incoming class and their families at the University's traditional opening convocation, which took place at 3 p.m. in the Green Center for the Performing Arts' Kresge Auditorium. Led by bagpipers, the president and the new students processed across campus on their way to the afternoon program, passing through the gate outside of East College and marching past the academic quadrangle on their way to the Green Center, where they were welcomed by cheering members of the DePauw faculty.

The students and their families spent the morning and early afternoon moving into their residence halls and enjoying a picnic.

The group of new students includes 589 members of the Class of 2015, as well as fifteen who are transferring to DePauw from other colleges and another eight foreign exchange students. Eleven percent of the incoming students (67) come from outside of the United States; another 18% are American undergraduates who represent a multicultural background. Twenty-one percent of the incoming undergraduates are first generation college students -- in other words, no one in their immediate family has graduated from college before. More than 23% of the enrolling students (123) have an alumni tie to DePauw. The new students represent 29 states and 20 foreign countries.

Cindy Babington, vice president for student life and dean of students, noted that 137 of the new undergraduates were members of National Honor Societies; 123 maintained straight “A” averages throughout their high school career; 41 were named either valedictorian or salutatorian of their high school classes; 39 students were selected class or student council president; and 151 were named captain of a sport in their senior year.

"So, what are you going to do here? What’s next?," President Casey asked the students who sat in front of him. "Well, you’re going to learn, you’re going to laugh, and -- though you can’t imagine it right now -- you’re going to get to know those of us on this stage very, very well." He added, "Education is a contact sport. You can wrestle with thoughts, you can be stunned by beauty. Awe is always possible."

Casey urged the new undergraduates to spend the next four years exploring subjects and spending time getting to know their professors, which happens on a residential liberal arts campus where the average class has 15 students. "Every single faculty member standing here -- every one -- is waiting for you to just look us in the eye and say 'tell me more.' That begins everything. Then, as David Brooks has written about the power of a question-led life: Begin to know something about something. Amass knowledge and pass it around."

The incoming students were also encouraged to avail themselves of the vibrant social opportunities the DePauw campus offers. Dr. Casey noted, "The people sitting next to you, in those seats right now -- in a very short while you will not be able to imagine that there once was a time in your life when you didn’t know them. They are your classmates now. You will study with them, and eat with them, and laugh with them."

The president also recounted the story of the University's first out-of-town student, Thomas Goodwin. In November 1837, traveling by stagecoach, wagon and on horseback and foot in terrible conditions, it took him more than four days to reach Greencastle from his home in Brookville, Indiana.

"Dear members of the Class of 2015. You are Tommy Goodwin. You are the realization of this University’s hopes. You are the new echoes of this old school. "

In closing, President Casey told the new class -- which will be part of DePauw's 175th anniversary celebration, which begins in January 2012 --

[Download Video: "Message from the President" - 1412kb] "Class of 2015: Have no small thoughts here, have no small dreams. Welcome to DePauw -- I can’t wait to meet you, to work with you, and see how you are going to change us, and change the world."

The new students also heard from Greg Schwipps, Richard W. Peck Professor of Creative Writing and associate professor of English at DePauw. Last spring, the senior class voted on the faculty member they wanted to address the incoming class of 2015 and Professor Schwipps was their choice.

A 1995 graduate of the University, Schwipps recalled being dropped off by his family on this campus on an August day 20 years ago. "I didn’t know how to study; I hadn’t read enough. I’d barely spent any time looking through a microscope. But DePauw was not then, and is not now, closed to kids from less typical backgrounds."

Schwipps -- who won the 2010 Eugene and Marilyn Glick Indiana Authors Award for his book, What This River Keeps -- continued, "The one thing I could do as well or better than some of my peers was write, so I worked hard to write the best papers I could, using my floormate’s word processor. (No one had laptops in those dark days of the early nineties.) I spent time with my new friends, and we figured out each other’s lives. I spent a semester in London, a Winter Term teaching creative writing to junior high kids, and hosted the heavy metal radio show on WGRE alongside two of my new best friends. I took classes that changed my life from professors who were so good at their jobs I couldn’t wait to emulate them. When I graduated from DePauw, I wasn’t a better person. But I was a more complete and fuller version of myself. While on this campus, I became who I was meant to be."

[Download Video: "Great Expectations" - 1633kb] "Following my commencement, and my time in graduate school, I returned to DePauw, where I’ve taught for 13 years. So I know a little bit about the transformative experience that awaits you here. And I know better than anyone that DePauw can shift the very axis of the earth, because that’s what it did for me. In the time I’ve taught here, I’ve seen plenty of students come here great, and leave even better, just as my roommate did. And I’ve seen an equally large number come here a little green, as I was, and leave a great deal more worldly and wise. So I’ve come to expect great things from you."

[Download Video: "Seize the Opportunities" - 2424kb] "Whether you’re scared to death or overconfident, you’re starting over right now. Beginning today, you are all both a DePauw student -- all caps and exclamation points -- and merely a DePauw student. You have arrived at a good undergraduate institution -- along with tens of thousands of other talented, smart, well-groomed men and women across 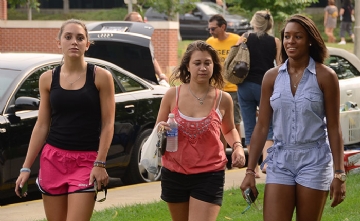 "We were each chosen to be here not by coincidence or luck," Charles F. Pierre, a DePauw senior and president of the student body, told the Class of 2015. "Each of you sitting before me today has made an indelible impression on our admissions officers, you have been hand picked to continue our University’s great academic tradition."

[Download Video: "A Senior's Advice" - 1300kb] "Dreams come true. I know that you do not need any more motivation to excel, but I feel obliged to tell you what you already have been told. You control your success. You control your destiny. At DePauw you will find many opportunities and, like the real world, it will be those who capitalize on those opportunities who will stand atop the mountain of success. At DePauw you will find the doors endless, so open them."

After the convocation, the new students met with their faculty advisers and began the orientation process before saying farewell to their families. Classes for the 2011-12 academic year begin on Wednesday.

Learn more about the incoming class in this article.