August 22, 2011, Greencastle, Ind. — "Got talent?" asks a headline in the September issue of Indianapolis Woman.  The magazine notes, "Did you know having an unusual skill could provide you with money to attend college? Listed below are some contests and scholarships that may just pur some extra cash in your savings account."

The article notes, "The Icy Frost Bridge Scholarship at DePauw University is restricted to female music students who can sing or play the national anthem 'with sincerity.' "

The item appears on page 45 of the magazine's August 2011 issue.

DePauw's Icy Frost Bridge Scholarship was created in 1973 through a gift by Don U. Bridge of Rochester, N.Y., in honor of his wife. Both were 1917 DePauw graduates; Mrs. Bridge 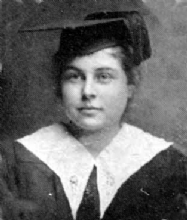 passed away in 1960. It has been cited in previous news stories, including a 2009 CBS Evening News report. (at right: Icy Frost's senior photo in the 1917 Mirage)

As a DePauw senior, Icy Frost was the first singer to perform A Toast to DePauw at its first public presentation on Old Gold Day in 1916. The song was written by her classmate, Vivien Bard '17.

Learn more in this previous article.