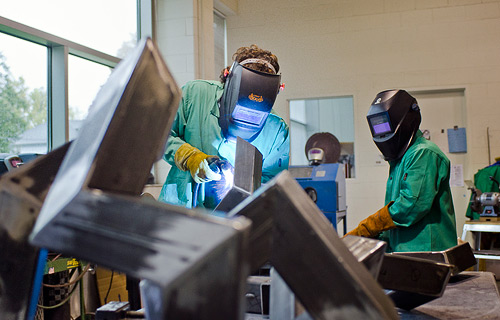 Take a moment and try to picture a protein. Having trouble? You’re not alone. Even powerful computers get caught up in their tangled shapes. But don’t worry; thanks to Associate Professor of Chemistry and Biochemistry Daniel G. Gurnon, your protein-picturing problems will soon be a thing of the past.

Inspired by the work of sculptor Julian Voss-Andreae, a German-educated physicist whose art is taken from world of science, Gurnon saw an opportunity to bring DePauw’s artists and scientists together. It was a two-birds-with-one-stone idea: encourage scientists to demonstrate their research creatively, and the non-scientific community would meet them halfway.

“I wanted students to understand that there are artistic decisions to be made in science,” Gurnon says. “To effectively communicate science, you have to think about how to convey information in a way that others can understand and appreciate, and in a way that draws people in for more.  You don’t need to know everything about biochemistry to be excited by, or even to understand what’s happening at a sub-micron level.” 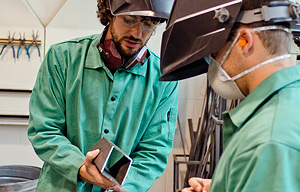 Under Voss-Andreae’s guidance, Gurnon (right), Assistant Professor of Art Jacob K. Stanley and 10 DePauw students created a set of sculptures that depict the birth of a protein called villin. The sculptures were unveiled in the Julian Science & Mathematics Center atrium as part of ArtsFest 2011, Oct. 30-Nov. 6, whose theme is “Art & Truth?.”

Proteins are the machinery of life, crucial to almost every cellular process. As such, they are also incredibly small, so it's no wonder we have problems visualizing them. However, you might think of a protein as a string of beads. Each bead is actually one of 20 different building blocks called amino acids, and a single protein can be made from hundreds of them.

Once all the beads are strung together, they begin to interact with each other and their environment, causing the string to twist and flex. Some beads want to be closer together, some farther apart; some like water, and some don’t; and so on. Scientists refer to this initial restlessness as folding. Almost instantaneously, the string folds into a shape unique to its particular bead sequence. Some proteins look like compact little knots, while others spiral outward like ribbon on a birthday present.

But the differences are more than cosmetic. For a protein to serve out its intended purpose, it needs to have the correct structure. On occasion, a protein will fold into an unexpected shape – with equally unexpected results. So-called "misfolded" proteins are even linked to diseases such as Alzheimer's and cystic fibrosis. 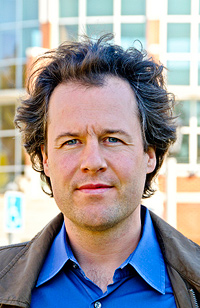 Research at the University of Illinois at Urbana-Champaign inspired Gurnon's decision to model villin. There, Professor of Physics Klaus Schulten and his student Peter Freddolino used powerful computers to “watch” villin as it took shape, trillionth of a second by trillionth of a second. Gurnon and Voss-Andreae (left) used Schulten’s data to design four snapshots of villin’s transformation from a simple kinked line into a crumpled spring.

You’ll find a few different protein models in Gurnon’s office – from ball-and-stick, to wire mesh – but Voss-Andreae’s style and technique sets the villin sculptures apart. Each segment of the protein was meticulously cut from 3-inch square steel tubes, then welded together and painted. The result: representations of villin’s structure 500 million times larger than the real thing.  It’s a simple, tactile and attractive way of visualizing a protein in which even the colors, chosen to convey changes in energy, serve a purpose.

“These sculptures provide a chance to actually see how complex these tiny proteins can be,” says Benjamin C. Cox, a sophomore Science Research Fellows (SRF) member. “Supercomputers take months to visualize what happens in fractions of a second in our bodies. This art provides a unique insight into the intricacy of life.”

Working in the studio, the group’s conversations would often drift into the science behind their art. One day, Stanley was carefully examining the base of a sculpture. Unsatisfied, he looked at Gurnon and said, “I don’t know, it just doesn’t feel alpha helical.”

“He was right,” Gurnon says. “The villin helix sort of unravels at the end, so we talked about why that happens. Our project led to a lot of conversations about art and science, and how professionals work in both areas.”

“I think people will be intrigued and curious about these sculptures because this style of art is different from anything that we have seen here at DePauw,” sophomore Trina M. Manalo says. “It shows that science and art can and do go together quite harmoniously.” 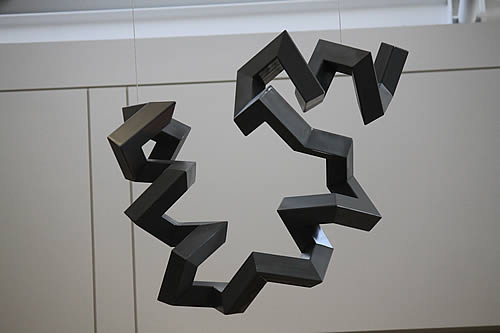