October 27, 2011, Greencastle, Ind. — DePauw University is listed among the "Top Producers of Fulbright Awards for U.S. Students, 2011-12" in the Chronicle of Higher Education. The chart, published in the October 24 issue, notes that four DePauw graduates received Fulbright Awards to study and live abroad for the current academic year, and that 21 students at the University applied for the prestigious grants.

DePauw is the only bachelor's institution in the state of Indiana to appear on this year's list. The University was also cited as one of the USA's top producers of Fulbright Fellows in the publication's 2009, 2008, 2007 and 2006 listings.

The four DePauw graduates who received Fulbright awards for 2011-12 are: Chelsey E. Jonason '11, who is spending nine months assisting teachers in Slovakia through an English Teaching Assistantship grant; Ashlee L. Anton '11 is using an ETA award to travel to South Korea to teach English to high school students in Madrid; Kyle K. Inman '11, the recipient of a Fulbright-mtvU Fellowship, is using the grant to conduct an independent research project in Northern Ireland; and Shaylyn "Shay" P. Laws '08 is in Lithuania teaching English through an English Teaching Assistantship grant.

Inman is also the subject of a feature story in the Chronicle.

Sponsored by the U.S. Department of State and established in 1946, the Fulbright U.S. Student Program competition aims to increase mutual understanding among nations through educational and cultural exchange while serving as a catalyst for long-term leadership development. It is the largest American international exchange program offering opportunities for students and young professionals to undertake international graduate study, advanced research, university teaching, and teaching in elementary and secondary schools worldwide. 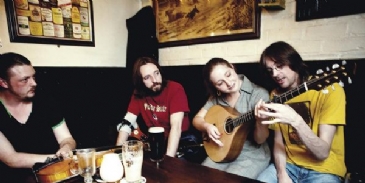 by Donal McCann at left: Kyle Inman '11 learns to play an Irish bouzouki in one of Belfast's oldest pubs)

Since its inception, the Fulbright Program has provided approximately 300,000 participants, chosen for their leadership potential, with the opportunity to observe each others' political, economic and cultural institutions, exchange ideas, and embark on joint ventures of importance to the general welfare of the world's inhabitants. Learn more by clicking here.