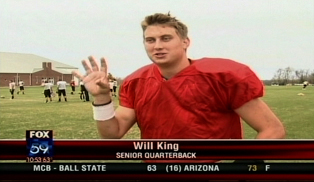 Luck, the star QB at Stanford University, is projected to be the top pick in the next National Football League draft.  Indianapolis Fox affiliate WXIN-TV included King in a report on the Indianapolis Colts' chances of getting Luck.

"You've just gotta be happy for the guy," King tells the station.

"He deserves all the credit in the world ... He truly is a very, very humble guy, very unassuming, he truly cares about his team and its accomplishments more so than his.  He does not like being complimented sometimes.  He really likes to deflect and put it on the guys, despite his numerous accomplishments."

See the piece by Fox 59's Larry Hawley on YouTube. It's embedded below.

Learn about the 118th Monon Bell, which Wabash College won 45-7, in this recap.