Also: "We Need Everybody" to Build a Better World, President Bill Clinton Tells 5,000 at  Ubben Lecture 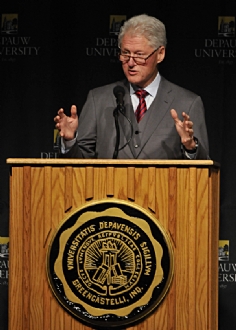 November 18, 2011, Greencastle, Ind. — "Bill Clinton says the 21st century is 'full of promise' despite problems ranging from authoritarian regimes to climate change," begins an Associated Press report on today's Ubben Lecture. "The former president spoke to thousands of college students Friday as part of a lecture series at DePauw University in Greencastle," it continues.

Read more, and access photos, at the website of Indianapolis NBC affiliate WTHR. Other reports can be found at WRTV and WISH. Also accessible are reports seen on today's noon newscasts and late news coverage.

The Indianapolis Star reports, "It’s not every day a former president comes to town, especially to a Midwest town with a population hovering around 10,000. But about 5,000 residents of Greencastle and the surrounding area converged on DePauw University on Friday to see President Bill Clinton give the 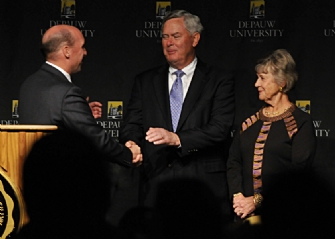 keynote speech at the 25th anniversary of the Ubben Lecture Series." Shari Held calls the event "the most high-profile speaker that DePauw has ever had -- and they’ve had plenty." (at right: DePauw President Brian Casey with 1958 graduates and series benefactors Tim and Sharon Ubben at today's event)

Also available are stories in Greencastle's Banner-Graphic and another AP summary.