The Strategy of Strategy Games 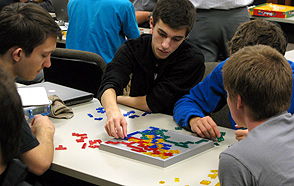 Students shuffle into a classroom at 9 o’clock on a Monday morning, only a few hours removed from the first Winter Term weekend of 2012. At the front of the room, Howard L. Brooks, professor of physics and astronomy, stands before a projection screen filled with the blocky namesakes of today’s object of study.

Played on a 20-by-20 grid, Blokus is a game in which 4 players try to place all their pieces on the board. That rarely happens. As the board crowds and players wall off their opponents’ advances, the punnier, more sinister meaning of name shines through.

To demonstrate, Brooks plays against 3 computer opponents. Placing his pieces briskly to keep his example moving along, he finishes with a perfect score.

“It’s not that easy at all,” another replies.

With his demonstration concluded, Brooks breaks out boards for the class. The clicking of plastic on plastic soon fills the room along with frequent sighs of disappointment, confirming that, no, it’s really not that easy.

Winter Term gives students and professors a chance to venture off-campus – or to explore the off-beat. Along with courses such as A Multidisciplinary Look at Ice Hockey (taught by a professor of biology) and The Science of Cycling (taught by a professor of communication and theatre), Brooks’ The Strategy of Strategy Games brings a familiar topic into the classroom for closer inspection.

“The whole reason for this course is to try to help with problem solving, reasoning and how to perceive what you see,” Brooks says. “There’s a lot to be said for having a certain level of anticipation. We have a nice variety of majors in here, and I think it helps them regardless of what they do.” 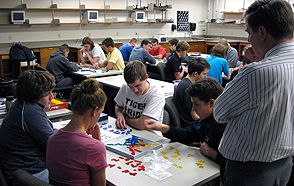 Blokus is among a number of games Brooks (left, observing a game) uses to teach strategy in the course. Starting with simple classics such as Tic-Tac-Toe and Connect Four, his students quickly pick up on terms such as “solvable” (you should never lose a game of Tic-Tac-Toe) and “opening” (always open with the middle column in Connect Four), before moving on to heavier material – Go, checkers and chess – in which strategy isn’t as straightforward. After three weeks of study, his students aren’t likely to give Kasparov any trouble, but they might make a deep run in a family tournament.

Separated by a quickly crowding board, two students took a moment between turns to talk about how they approach strategy games.

“Playing these games opens up a different part of your brain,” Robert W. S. Martens ’15 says. “It’s not just about the move you’re making now, but trying to set yourself up for something later.”

“You have to learn how to approach situations in new ways,” Jonathan A. Saddler ’13 says. “And you have to be patient. I found that I can learn more about a game's strategy by carefully playing through each match from start to finish, even if I know I cannot win.”

Plan ahead, adapt to change, and be willing to learn from your mistakes – lessons that extend far past a game board.

The history of the course goes back to Brooks' own time as an undergrad in 1974, when a professor at his college offered a similar course during its winter session.  Later, at DePauw, Brooks adapted the course to Winter Term and has taught it off and on since 1983.

Nearly 40 years since Brooks took the course himself, many things have changed. The Internet gives his students an endless stream of opponents and strategy advice, and new games always offer new challenges. Brooks himself brings something different to the table. His professor was a political scientist who loved the diplomacy and alliances of convenience found in multiplayer strategy games. Brooks, a physicist, is more interested in the analytical, cause-and-effect of moves as their consequences cascade through many turns. But it’s what has remained the same that matters the most to Brooks.

“There’s just something about sitting together with a group of people and playing a game,” he says.