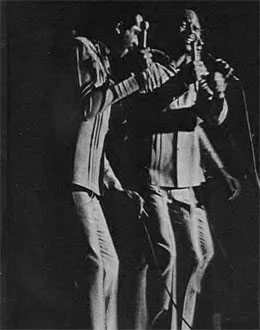 The artists behind the hit songs Reach Out I'll Be There and Standing in the Shadows of Love delighted a crowd in the shadows of DePauw University's East College tonight.  The Four Tops presented the concert that wrapped up a celebratory Monon Bell weekend.  The day began with the Tigers surprising arch rival Wabash College 17-7 at Blackstock Stadium.  The Four Tops performed in Bowman Gymnasium at 8:15 this evening.

The Motown favorites performed two 45-minute sets. Tickets, which were $5, included admission to last night's dance.  Twenty-four hundred tickets were made available for the two events, with 1,500 alloted to DePauw and the other 900 for Wabash students.