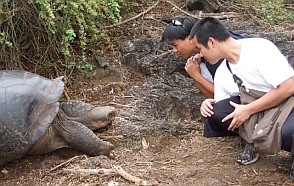 Seniors Alan Lee and Joseph Barana share a moment with an old tortoise.

Associate Professor of Biology Kevin S. Kinney has traveled to the Galapagos Islands more than most people. Since his first trip eight years ago, he’s returned again and again to visit each of the volcanic islands and their unique species, becoming just as fascinated by them as Charles Darwin famously was in 1835. Each trip, he says, offers something new. Sure, there’s enough to study there to last a biologist a lifetime, but there’s another reason why every visit is so fresh and different: Kinney doesn’t go alone.

Like the students who travel with him, Kinney’s first visit to the Galapagos was during Winter Term. Since 2004 he’s repeated the course every other year with a new group. It’s not that his students are noticing species he missed on a previous trip. Immersed in newness, many are just looking at different things than a physiologist would. 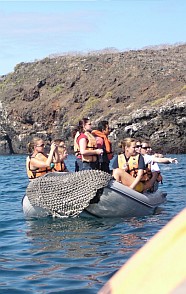 “My preference is to get as diverse a group of students as possible,” Kinney says. “I know what a scientist will say about the Galapagos. I never know what a musician will say.”

The course projects are often as varied as the students on the trip. Some students have focused on the people of the Galapagos, which, while 600 miles west of the mainland, are home to 25,000 Ecuadorians. For another, it was the food that was worthy of documenting.

Since his first trip, Kinney has become more and more familiar with the islands and what to see and do there. He eventually moved away from the standard tours most visitors opt for, instead designing a trip with the help of a local guide. This year, he and his students island-hopped much as Darwin did, ferrying between destinations on a boat that doubles as their hotel. They explore an island during the day and return to the boat in the evening. The next morning, they wake up on a new island.  It may be the best way to appreciate how special the islands remain two centuries after they changed biological science forever.

The Galapagos Islands have the reputation of being an almost otherworldly destination, and it’s clear why as soon as you step off the airplane. No matter a student’s interest, no one leaves disappointed.

“The biology students have more of what we would call a prepared mind,” Kinney says. “Even though they know what to expect, it’s always a shock to them how much the islands live up to that.” 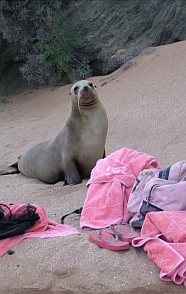 Millions of years without any large land-based predators have rendered most of the islands’ species almost indifferent to human visitors. Sea lions and three-foot iguanas lounge about on sun-warmed benches as if they run the place. And in a way, they do.

The islands are protected as a national park, with strict rules about how people can conduct themselves. Visitors have only limited time on the islands before they must leave, and certain areas, such as nesting locations, are completely off limits. With tens of thousands of visitors to the islands each year, there’s a question of how much of an impact people may be having on the indigenous species and their behavior.

“There’s this tension between ‘don’t let any people visit,’ in which case Ecuador has no economic incentive to preserve the islands, and ‘just let everyone do what they want,’ but you can’t let people visit a place without affecting it,” Kinney says. “I try to have the students be aware that we are a part of a problem when we go down there, but it’s sort of the lesser of two evils.”

Why all the fuss? The Galapagos Islands, a volcanic archipelago, preserve a natural history that simply can’t be found anywhere else in the world. Kinney says that Darwin’s “ah-ha” moment may have come when the islands’ governor explained that he could identify which island a tortoise had come from based on its shell. 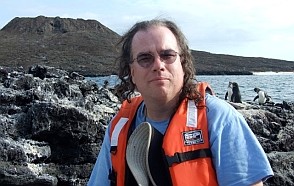 “When you’re told that the species on these islands, which are all in view of each other, have significant differences even a person without science training can see, that’s remarkable,” Kinney, left, says. “You don’t have to have something as drastic as the arctic versus the equator. The islands may look the same to us, but if you’re a tortoise, they’re very different. And the populations on each island are different. That’s what I think really set Darwin off.”

The principles of Darwin's theory literally stare you in the face on the Galapagos, but there is a downside to being a place unlike any other. Many of the islands' species are endemic, or found there and only there, like kangaroos in Australia or lemurs in Madagascar. The Galapagos penguin, for example, is the only penguin found north of the equator, and the Galapagos tortoise is the largest tortoise in the world. Were the islands to disappear, so would these species. As Kinney says, there are no replacements handy.

“I hope students come away thinking that this place is important, that it needs to be protected,” Kinney says. “And by extension, there are other places in the world that are important, as well.”