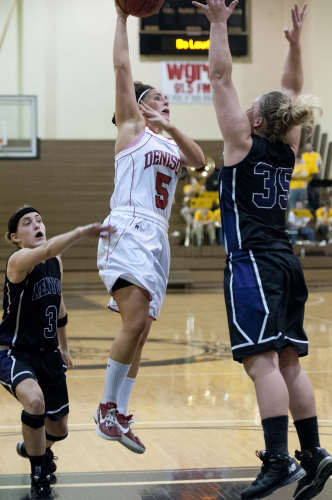 The Big Red improved to 20-7 and advanced to Saturday's 7 p.m. championship game where they'll face the winner of the DePauw-Wittenberg game. The title game appearance is Denison's seventh in the last eight years.

Denison never trailed and led by as many as 10 in the first half before heading to the intermission with a 28-22 advantage.

In addition to Coggins and Nuzzo combining for 37 points, Lydia Harlan added 12. Jane Windler and Annie-Rae Dura each hauled down eight rebounds.

Kayla Ernst paced Kenyon with 18 with Morgan Korinek posting a double-double of 10 points and 11 rebounds.

Denison shot 42 percent to Kenyon's 34.8 percent and the Big Red made all 13 of their free throws.