DePauw University's Class of 2012 and their families and friends can relive the pageantry of commencement day and have a permanent reminder of a very special day. For an eleventh consecutive year, DePauw will produce a DVD of its commencement ceremonies, which will include footage of each graduate receiving their DePauw diploma as well as a range of bonus materials.

Orders are now being accepted at $19.95 for the first disc; additional DVDs sent to the same address will be $8 each (7% sales tax will be added to Indiana orders). An online order form is available here.

The 173rd annual commencement will take place on Sunday, May 20, at 10:30 a.m. in Holton Memorial Quadrangle. James B. Stewart -- Pulitzer Prize-winning 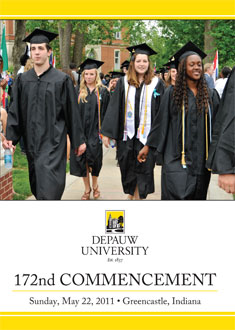 journalist, bestselling author, columnist for the New York Times and 1973 graduate of DePauw University -- will deliver the principal address to the graduating class. (at left: front cover of 2011 commencement DVD)

The multi-camera production will capture the sights and sounds of the ceremony, including the procession of graduating seniors, speeches and -- as noted -- video of each graduate receiving his or her diploma. Those looking for a particular part of the program can immediately access what they seek via the DVD's menu. For example, to see a graduate whose last name is Carter, you click on the letter 'C' in the menu and are immediately taken to the first person whose last name begins with the letter 'C' receiving his or her diploma. Users can also jump to specific speeches, or watch the program from beginning to end.

The DVDs are professionally replicated, not duplicated, and are housed in a decorative jacket. 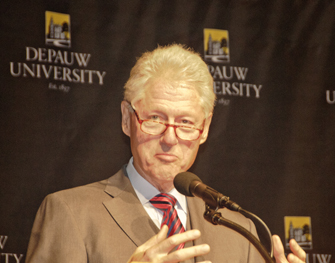 opening convocation at which the Class of 2012 was welcomed to DePauw and Ubben Lecturers such as Bill Clinton, Leyhmah Gbowee, Karl Rove and Howard Dean); "Monon Memories"of the last four football battles with Wabash College for the prized Monon Bell; a photo gallery of commencement day activities; the video created to mark DePauw's 175th anniversary celebration; and vintage film from the DePauw Archives.