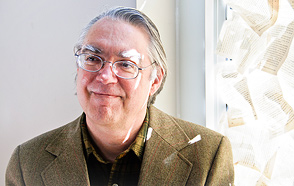 The importance of animals in human history is almost impossible to overstate. For millennia, animals have been tools of war and agriculture, companions and adversaries. And yet, the field of human-animal studies is a relatively recent pursuit in academia. Hosted online by DePauw University, Humanimalia: A Journal of Human/Animal Interface Studies is one of only a handful of academic journals dedicated to the ancient, but changing, relationship.

Professor of English Istvan Csicsery-Ronay branched out from his background in science fiction to found Humanimalia in 2009. Like others in his field – particularly its youngest scholars – he was drawn to human-animal studies by the conspicuous absence of animals in the digital age.

“There are more and more young people who are interested in science fiction studies because they are fascinated by contemporary techno-culture,” Csicsery-Ronay says. “What’s really struck these folks is that most of the technophilic, technocentric thought in our culture entirely excludes animals.”

Rather than approaching the subject from a specific point of view, however, Humanimalia includes perspectives from philosophy, politics and art side-by-side.

“There was only one major journal that dealt with the philosophical dimensions of human-animal studies, but it’s very activist, and has a very social-theoretical approach,” Csicsery-Ronay says. “The point of Humanimalia is to have a venue for more humanistic approaches.”

In the spring 2012 issue of Humanimalia, Fredrik Karlsson, a post-doctoral researcher at Uppsala University in Sweden, writes about the tendencies of anthropomorphism, or attributing human traits to non-humans, and the opposing mechanomorphism, or describing animals strictly in mechanical terms. While Karlsson acknowledges that casual comparisons to human behavior might assume too much of animals, he argues that anthropomorphism can be still a valuable tool for creating familiar analogies and better understanding.

“There have been arguments for using something that’s called critical anthropomorphism,” Csicsery-Ronay says. “Essentially, you can’t get to square one in imagining that animals have emotional lives or cognitive flexibility – all the things a machine can’t have, but we assume a sentient organism does have – without using our only model for that, which is humans.”

How we talk about animals might not affect only how we treat or understand them, either. A perceived wide separation between animals and humans may also have repercussions for human society, Csicsery-Ronay says.

“The larger you consider the gap between humans and animals to be, the more likely you are to treat animals as just things,” he says. “The greater that gap is, the more inclined a culture is to view the inferior human – which could be women, a race or ethnicity – in animal terms.”

Another article in the spring issue, written by Thom van Dooren, a lecturer at the University of New South Wales, Australia, and Deborah Bird Rose, a professor at Macquarie University in Sydney, discusses human-animal interface in a geographic sense.

Over the years, the city of Sydney grew to envelop a colony of penguins, who’ve adapted to their increasingly urban surroundings by nesting in, around and under man-made structures. Similarly, a large species of bat called flying foxes call many of Sydney’s tree-filled parks home. Both the penguins and the flying foxes have permanent habitats in the city, but as undomesticated animals, they could be considered curious guests or, at worst, pests in the traditional concept of an urban space. Instead, van Dooren and Rose promote them as co-inhabitants of a multi-species city.

The belief in human and animal commonality, whether sharing space or psychology, is found throughout Humanimalia.

“Everybody who writes for the journal accepts as a baseline that humans and animals have evolved together, and that the nature-culture division that’s so core in civilizations is really an artifact," Csicsery-Ronay says.

Six issues in, Csicsery-Ronay says he's pleased with Humanimalia's progress, half-jokingly expressing relief that it has so far avoided an open fight between different wings of its readership. There’s still room to grow, however, and he hopes that the journal's open, online nature will help broaden the conversation.

“Human-animal studies is absolutely fresh and new,” he says. “I look at Humanimalia as one of the mechanisms for creating the field. In a way, I’m watching an experiment. I have this feeling that we can watch a new intellectual institution develop from the ground up with the help of social media. We just need more people reading it and writing for it.”