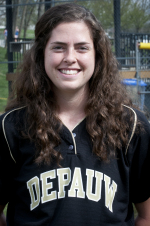 Greencastle, Ind. - DePauw put together big innings in both games of its doubleheader with visiting Manchester and came away with a sweep by scores of 9-3 and 9-7. The 10th-ranked Tigers improved to 18-4, while the Spartans dropped to 14-14.

In the first game, Manchester took a 1-0 lead in the third as Holly Morris hit a solo homer to left.

The Tigers responded in the bottom of the third as Cymone Allen and Rachel MacBeth reached on infield singles and advanced on Jamie Story's ground out. After Jen Kosinski walked, Amy Hallett (pictured) hit a 3-2 pitch over the fence in right center.

The Spartans added one in the fourth as Amy Hommema led off with a double and later scored on Janikka Tillotson's double. DePauw extended its lead to 9-2 in the bottom of the fourth as Haley Buchanan led off with a walk, moved to second on Samantha Szyska's sacrifice bunt and to third on Emily Dieckmann's ground out. Allen's single scored Buchanan and Allen scored on MacBeth's double.

Story's single through the right side brought home MacBeth and, after Kosinksi walked, Hallet drilled a double off the fence in left which plated Story. Kosinksi then scored when the relay throw was dropped.

Manchester's final run came in the sixth when Hommema led off with a single and pinch-runner Whitney Ohmer later scored on Danielle Howell's single.

Emily Dieckmann improved to 8-1 with the win, while Maureen Lund dropped to 9-6.

DePauw struck first in the nightcap as MacBeth and Story were hit by pitches and Kosinski walked to load the bases. Holly Paris drove in MacBeth with a ground out and Buchanan knocked in two with a double down the left field line.

Manchester took a 5-4 lead in the top of the third when Morris hit her second homer of the day, a solo shot to left. Kendall Jefferies then reached on an infield single, moved to second on Kylie Planck's sacrifice bunt and to third on Hommema's base hit. Emily Willmann followed with a single to left which scored Jefferies. Kayla Yates reached on a fielder's choice which allowed Hommema to score before Janikka Tillotson drove in a pair with a single.

The Spartans evened the score in the fifth as Willmann and Yates each singled and Tillotson walked to load the bases. Morris delivered a two-run double to right center which tied the contest at 7-7.

DePauw took the lead for good in the sixth as Story led off with a double and moved to second on Kosinski's sacrifice bunt. Hallett then homered to straightaway center for her second round-tripper of the day.

Five DePauw players collected one hit each, but the Tigers drew 11 walks. Manchester finished with 10 hits as Jefferies, Willmann and Morris each had two.

Dieckmann improved to 9-1 after pitching three innings of scoreless relief, while Ashlea Nash dropped to 5-7.