Harmon and Owens Finish Third and Fourth in NCAC Heptathlon 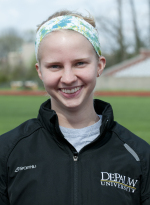 Listed below are each of their performances by event.