Joseph P. Allen IV, a 1959 graduate of DePauw University who has flown on two space shuttle flights and is a member of the U.S. Astronaut Hall of Fame, will return to his alma mater on Thursday, May 10, to offer "Reflections from the Edge of Earth." Dr. Allen's speech is part of DePauw's 175th Anniversary Distinguished Alumni Lecture Series. The program will begin at 8 p.m. in Meharry Hall of historic East College and is free and open to the public.

A webcast of the event may be viewed via this link.

Born in Crawfordsville, Indiana, in 1937, Allen earned a Bachelor of Arts degree in mathematics and physics from DePauw and a master’s and doctoral degrees in physics from Yale University. He was a nuclear physics research associate at the University of Washington when NASA selected him as one of eleven scientist-astronauts in 1967. After serving in several administrative positions with NASA, including four years at headquarters, he returned in 1981 to Johnson Space Center where he helped support the first space shuttle flight.

After four test flights, Columbia was ready for operational duty, 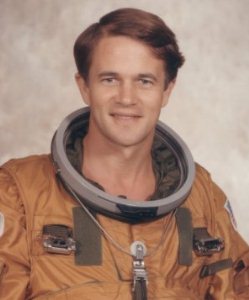 blasting off in 1982 with Allen and three crewmates to deliver the first satellites to orbit for paying customers. Nine hours after liftoff, Allen and William Lenoir conducted a countdown and sent a Satellite Business Systems communications satellite spinning out of the cargo bay. They repeated the feat the next day with a Canadian satellite. Allen and Lenoir were to have made the first shuttle space walk, but technical problems with the space suits canceled this plan.

History’s first space salvage mission began when Allen and four other astronauts blazed into orbit aboard Discovery in 1984. Their main goal was to retrieve two communications satellites, Westar 6 and Palapa B2, which had been stranded in useless orbits after deployment from an earlier shuttle. Early in flight, the crew released a pair of satellites and then set out to round up their first target, Palapa. Once they caught up with it, Allen and Dale Gardner, wearing space suits, glided outside, with Allen moving untethered over to Palapa, propelled by a Buck Rogers-like jet pack. He latched onto it and moved it into position to be grabbed by the ship’s robot arm. For 90 minutes, one circuit of the globe, Allen held aloft the 1,200-pound satellite while work was done on it before it was manually lowered into the cargo bay. Allen and Gardner used similar procedures two days later to retrieve and stow Westar. Back on earth, the two satellites were repaired for return to orbit. 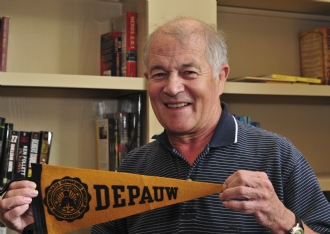 Joe Allen left NASA in 1985. He served as chief executive officer of Space Industries International, Washington, D.C., and later was chairman of Veridian Corp., until he retired in 2004. Allen was inducted into the U.S. Astronaut Hall of Fame on April 30, 2005. A wrestler at DePauw, he is a life trustee of the University, a member of the University's Athletic Hall of Fame, and received the Old Gold Goblet from DePauw in 1985.

Dr. Allen's father, Joseph Percival "Perk" Allen III '30, was a member of DePauw's economics faculty from 1957 until his retirement in 1975.

Dr. Allen will be introduced by his classmate and retired Los Alamos National Laboratory scientist Robert Godwin '59. Following his remarks, Allen will take part in a conversation moderated by Howard Brooks, Paul B. Kissinger Professor of Physics and Astronomy at DePauw. A reception for Joe Allen will be held immediately following the event at Beta Theta Pi fraternity. 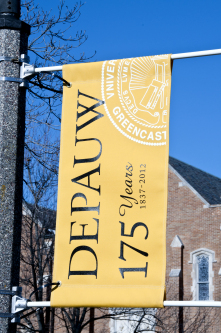 Learn more about Joe Allen in this previous story.

Learn more about the 175th anniversary celebration by clicking here.