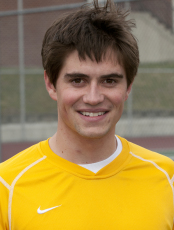 Greencastle, Ind. - In voting by the men's tennis coaches in the North Coast Athletic Conference, six DePauw student-athletes have earned spots on the all-conference teams.

Hubbard and Moss were named to the doubles first team after finishing with a 25-6 mark, while Miles and Kopecky took second team doubles honors with a 21-8 record.

DePauw finished the season with a 17-8 overall record and third at the NCAC Championships. The Tigers were ranked 28th in the most recent Division III Coaches' Poll.