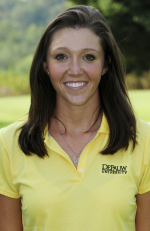 Angola, Ind. - Following a round of 307, DePauw moved into second place at the halfway point of the NCAA Division III Women's Golf Championships with a two-round total of 621, just one stroke behind 12-time defending champion Methodist.

Taylor Beaty (Sr., Decatur, Ind./DeKalb) leads the way with a 151 which is good for a tie for second place and two strokes behind leader Catherine Wagner of Wisconsin-Eau Claire. Beaty (pictured) recorded an eagle on the par-5, 18th hole to shoot a 73 for the day. Paige Gooch (So., Fort Mitchell, Ky./Beechwood) birdied the final two holes for a 75 and a two-round total of 152 which is tied for fourth.

The 307 round was DePauw's best in NCAA play.

Third-round play at the Zollner Golf Course takes place on Thursday and the tournament wraps up on Friday.