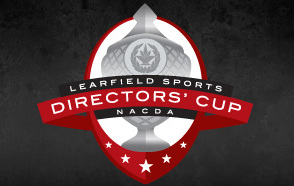 Totaling 368.5 points, DePauw recorded its 11th top-50 finish in the 17-year history of the program and the eighth straight. The Tigers' 42nd-place showing also marked the 17th time in as many years that DePauw ranked ahead of all other Indiana Division III institutions.

DePauw's women's golf team recorded its third runner-up NCAA finish in program history, while the women's tennis team advanced to the third round this spring.

Making its ninth straight Division III postseason appearance, the women's basketball squad advanced to the second round, while the men's swimming and diving team finished 19th.

DePauw's baseball team appeared in the Division III Championship for the first time since 2001 and finished fourth in the regional and tied for 29th in the nation. Making its first NCAA trip since 2000, the men's soccer team dropped a first-round match, while Catie Baker led the women's swimming and diving team to a tie for 39th.

DePauw teams finished the year with a 214-85-6 record for a .711 winning percentage as the Tigers captured the North Coast Athletic Conference All-Sports Trophy. in their first year of conference competition.