"The race for Indiana's U.S. Senate seat remains too close to call, even as the Republican candidates for governor and president enjoy large leads over their Democratic opponents, according to a new survey of Hoosier voters," reports the Times of Northwest Indiana this afternoon. Dan Carden reports, "The Sept. 19-23 Howey/DePauw University poll of 800 likely voters found Democratic U.S. Senate candidate Joe Donnelly ahead of Republican Richard Mourdock, 40 percent to 38 percent, with 7 percent supporting Libertarian Andrew Horning. Fifteen percent of voters said they remain undecided."

"The poll has a margin of error of plus- or minus-3.4 percent, meaning Donnelly and Mourdock are statistically tied in the race to replace U.S. Sen. Dick Lugar, who Mourdock defeated in the Republican primary," according to the report.

The latest Howey/DePauw Poll shows Republican Mike Pence holding a 13 point advantage over  Democrat John Gregg in the race for Indiana governor (47% to 34%), and Republican Mitt Romney up 52% to 40% over Democratic President Barack Obama, who carried Indiana -- which typically votes Republican in presidential races -- in 2008.

Read more at the newspaper's website or at Howey Politics Indiana. It's also noted by the Wall Street Journal.

This is the third in a series of four polls that will be released during the 2012 election cycle. The first Howey/DePauw poll was released on April 5 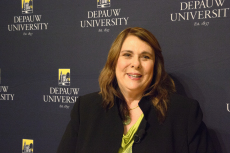 with another on May 4. A final survey will be conducted next month.

CNN's chief political correspondent, Candy Crowley, was at DePauw Tuesday night to discuss Campaign 2012, three weeks before she moderates the second Obama-Romney debate.  A summary of her Ubben Lecture is available here.