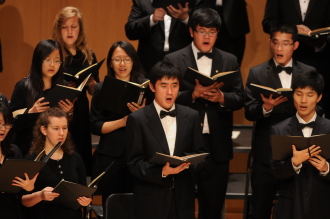 The DePauw University School of Music welcomes alumni back to campus for Old Gold Weekend with a concert tonight featuring the university-wide choirs: the DePauw University Chorus and the DePauw Chamber Singers. The program begins at 7:30 p.m. in Kresge Auditorium, located within the Green Center for the Performing Arts.

General admission tickets for DePauw University Chorus concerts in the Judson and Joyce Green Center for the Performing Arts are $3; tickets for all students and seniors over 65 are free. Tickets can be obtained via this link.

Performances of four songs celebrating the joy of singing by the DePauw University Chorus, the School's large choir, open the concert. Each of these songs has been thoughtfully selected from a different time period from the Renaissance through the 20th century: "Sing a Mighty Song" by Daniel E Gawthrop (b. 1949); "Im Wald," from Gartenlieder, by Fanny Hensel (1805-1847); "Cantate Domino" by Claudio Monteverdi (1567-1643); and "Cantique de Jean Racine" by Gabriel Fauré (1845-1924).

The program also celebrates the year of the London Olympics and Queen Elizabeth II's diamond jubilee by presenting music written in honor of the three most famous reigning queens of England. In the second portion of the concert, the Chamber Singers will perform four madrigals written for Queens Elizabeth I and Victoria, including two songs that have never before been recorded, A.C. Mackenzie's "With Wisdom, Goodness, Grace" and J. Frederick Bridge's "For All the Wonder of Thy Regal Day."

Benjamin Britten's vibrant "Choral Dances," from his 1953 opera Gloriana, composed in celebration of the coronation of Queen Elizabeth of II, features performances by two DePauw faculty members, harpist Harriet Moore and tenor Kerry Jennings, who will sing the role of Robert Devereux, Earl of Essex.

The evening will culminate in a joint performance by the University choirs of "If Music Be the Food of Love" by David Dickau.

Founded in 1884, the DePauw University School of Music is the nation's sixth-oldest private institution for post-secondary music instruction and the longest-running in Indiana. Learn more here.