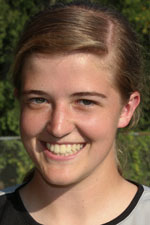 Greencastle, Ind. - DePauw sophomore Emma Cooper (Tulsa, Okla./Cascia Hall Prep) has been named the North Coast Athletic Conference Women’s Soccer Player of the Week for her performances against Wittenberg and Denison in the NCAC Tournament.

Cooper allowed only one goal in 180 minutes of NCAC Tournament play and had six saves as the fourth-seeded Tigers knocked off top-seed Wittenberg and third-seed Denison to win the tournament.

In DePauw's 2-1 semifinal win at Wittenberg, Cooper had two saves and allowed just one goal in the 80th minute.

She turned away four shots in the 1-0 title game win at Denison which earned the team a berth in the NCAA Division III Championship.

Cooper has a 0.75 goals against average on the season and a save percentage of .857 with four wins in six starts along with three shutouts.

DePauw has won four straight matches and five of the last six and will open NCAA play on Saturday, Nov. 10 against Emory in a match played at Centre College.