Sophomore to be Honored for 'Realizing the Dream'

DePauw University sophomore Taylor M. Zartman is one of 31 students from Indiana's independent colleges and universities who will be honored this weekend for "Realizing the Dream." Zartman and the other honorees have realized the dream of being the first in their families to go to college, have been selected by their colleges for outstanding achievement in the freshman year, and are now advancing towards successfully completing their bachelor’s degrees.

The 23rd annual "Realizing the Dream" banquet will take place Saturday at the Hilton Indianapolis North. The event, which recognizes first-generation students attending Independent Colleges of Indiana campuses, along with their inspirational teachers and families, is made possible by a grant from Lilly Endowment Inc. to ICI.

Each honored student will receive a $2,000 check to help with college costs, and the teacher they have selected as "most influential" in their lives will receive $1,000. Zartman selected Stu Engle, 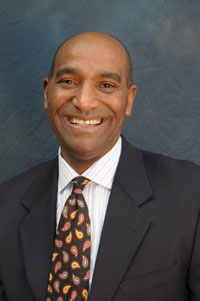 The keynote speaker at the banquet will be Alan Hill (pictured at left), vice president for enrollment and marketing at Franklin College and 1981 graduate of DePauw.  Hill, a former member of the DePauw administration, was himself a first generation college student.

One out of every three students on ICI campuses is a first-generation one. Generous financial aid provided by the campuses themselves, combined with state and federal grants, makes a private college education a possibility for all students in Indiana.

"We are so grateful to Lilly Endowment Inc. for making this inspirational program possible," says Richard L. Ludwick, ICI president & CEO. "We are proud, too, that because of the higher graduation rates of our ICI colleges and universities, these students are twice as likely to realize the dream of completing their degrees in four years."

Independent Colleges of Indiana is a membership association of the state’s 31 private, nonprofit colleges and universities. ICI member institutions enroll some 90,000 students (approximately 20 percent of all students statewide) and annually produce 35 percent of all bachelor’s degrees in Indiana. Learn more here.