For the eighth time in the last 9 years, students from DePauw University will compete in the national Ethics Bowl competition. Over the weekend, two teams from DePauw competed in the 14th annual Central States Regional Ethics Bowl, which took place over at Marian University in Indianapolis. Out of twenty teams in the competition, DePauw's entries took two of the top four spots. As a result, DePauw advances to the 2013 Intercollegiate Ethics Bowl, which will be held on Thursday, February 28, 2013, in San Antonio, Texas. 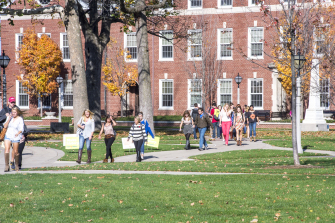 Learn more about the event here.

Last year, DePauw reached the semifinals of the national competition. Details can be found in this summary.

The Central States Regional Ethics Bowl is sponsored by the Association for Practical and Professional Ethics (APPE).