DePauw Bows out of NCAA Play after Second-Round Loss

River Forest, Ill. - DePauw competed in its 10th overtime contest of the season and, for the first time in 2012, finished on the short end in an extra session after a 2-1 loss to Dominican in the second round of the NCAA Division III Men's Soccer Championship.

DePauw finished the season at 14-2-5, while Dominican improved to 18-2-1 and advanced to the Division III Round of 16. The game was originally scheduled to be played yesterday, but lightning and darkness forced postponement until this morning. 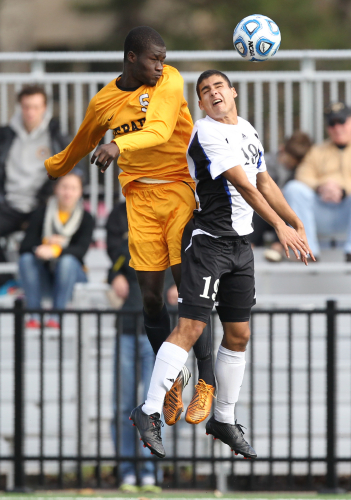 The host Stars took an early 1-0 lead on Logan Marvin's goal which came on another double assist by Ryan Roberts and Marco Alvarez at 8:26.

The Tigers evened the score on Jon Krok's first collegiate goal at 29:06 with Matt Reda assisting.