Ellis Repeats as Regional Player of the Year 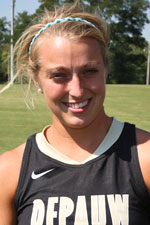 Ellis led the Tigers with 27 goals this season and was second with 10 assists for a team-high 64 points. Her single-season goals and points totals rank second in school history.

Earlier this year she broke DePauw's 25-year-old career records for goals and points, held by Colleen Konicek. Ellis finished her career with 75 goals and 172 points.