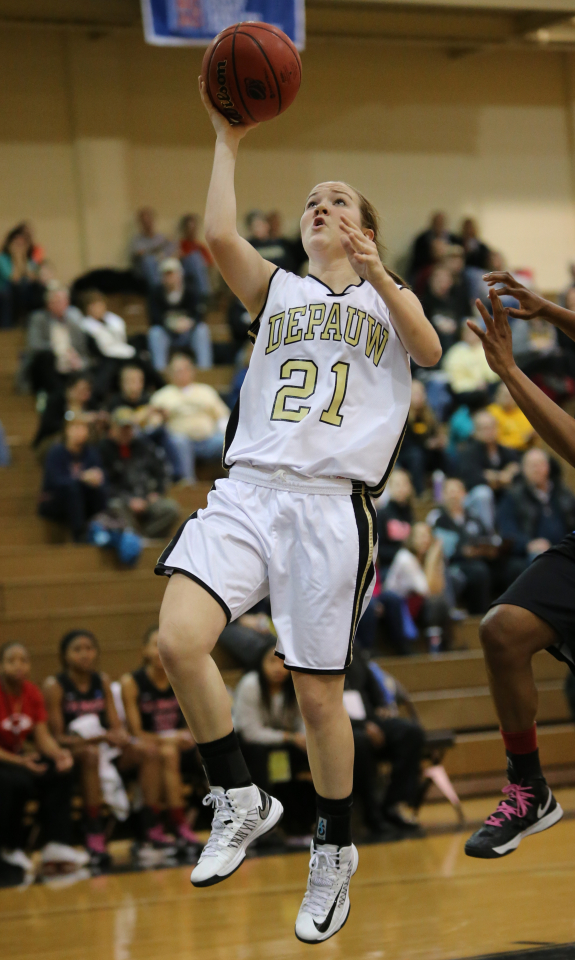 Greencastle, Ind. - DePauw's top-ranked women dominated again on the boards and committed just five turnovers on the way to a 78-51 win over Maryville (Tenn.) in the NCAA Division III Women's Basketball Championship Second Round game at the Neal Fieldhouse.

DePauw improved to 30-0 with the win and advances to the Division III round of 16 for the seventh time in program history and first since 2008. Maryville finishes its season at 24-5.

Kathleen Molloy knocked down three-pointers on back-to-back possessions early in the game to extend a one-point lead to seven. While Maryville trimmed it back to three, DePauw continued to stretch the gap and Alison Stephens' put back as the first half horn sounded send the Tigers to the locker room with a 41-30 advantage.

The Tigers shot nearly 49 percent in the first half, but the Scots blistered the nets at 58.3 percent which might make it hard to believe that the hosts took an 11-point lead into the break. However, DePauw committed just one turnover, outrebounded the Scots 19-9 and snagged eight offensive boards.

Savannah Trees' (pictured) steal and subsequent three-point play on the first possession of the second half set the tone for the rest of the game. The Scots were within 14, but Ali Ross delivered a layup off of her own steal and then Alex Gasaway knocked in a three-pointer to start the Tigers on a 15-0 run that put the game away.

Maryville, which shot just 31.8 percent in the second half, didn't reached double figures in second-half scoring until 6:17 remained and DePauw's lead reached as many as 30 points.

"They’re (Maryville) a great team and a tough team to defend," DePauw head coach Kris Huffman said. "I was very proud of our effort in the second half."

Trees finished with a career-high 24 points on 9-of-12 shooting including nailing all three of her shots from beyond the arc. Kate Walker added 14 points and four assists, while Ross dropped in 10.

Ellie Pearson grabbed 18 rebounds just one night after notching a career-high with 19. Stephens followed with 10 rebounds as DePauw held a 42-20 edge on the glass. The Tigers totaled 17 offensive rebounds to Maryville's three.

The teams shot nearly the same percentage from the floor, but DePauw hit half of their 14 three-point attempts and turned the 17 offensive rebounds into 17 second-chance points.

DePauw will face Washington University in next Friday's sectional semifinal at a site to be announced tomorrow. The Tigers and Bears squared off at Illinois Wesleyan on November 25 with DePauw taking a 60-59 decision.