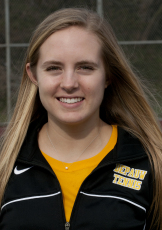 Wittwer helped lead the Tigers to a perfect 3-0 week and posted a 3-0 record in both fifth singles and third doubles.

She helped DePauw to a convincing 8-1 victory over Olivet Nazarene on Monday and a pair of 5-4 wins over Washington-St. Louis and Wisconsin-Whitewater on Saturday.