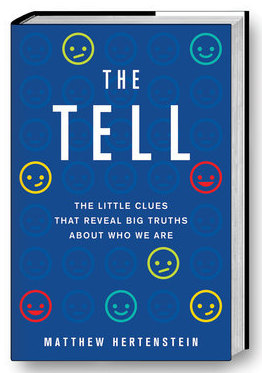 The Tell: The Little Clues That Reveal Big Truths About Who We Are, the new book by Matthew J. Hertenstein, is "an entertaining look at our oft-maligned intuitive capabilities, offering useful tips on how we may sharpen our powers of observation and increase the accuracy of our predictions," notes Kirkus Reviews. Published by Basic Books, The Tell is scheduled to arrive in bookstores next month.

Kirkus notes that Dr. Hertenstein, associate professor of psychology at DePauw University, "contends that the predictive power of the human brain is exemplified by its ability to draw accurate conclusions 'based on observations of brief samples of others' behavior.' The author has honed his lively style with appearances on NPR and the Today Show and his commentaries in the New York Times and other major publications, and he takes his title from the psychological component in poker. An inexperienced player reveals clues to his hand by a variety of 'tells.' Before deciding on a bet, an experienced player will judge 'how an opponent stares, the speed with which he lays down cards, or how quickly he is breathing.' Hertenstein expands on this idea," the review states.

The full review appears in the October 2013 issue of Kirkus Reviews and will appear online two weeks before the book's November 12 publication.

The publisher's synopsis elaborates, "Just as expert poker players use their opponents’ tells to see through their bluffs, Hertenstein shows that we can likewise train ourselves to read physical cues to significantly

increase our predictive acumen. By looking for certain clues, we can accurately call everything from election results to the likelihood of marital success, IQ scores to sexual orientation -- even from flimsy evidence, such as an old yearbook photo or a silent one-minute video. Moreover, by understanding how people read our body language, we can adjust our own behavior so as to ace our next job interview or tip the dating scales in our favor. Drawing on rigorous research in psychology and brain science, Hertenstein shows us how to hone our powers of observation to increase our predictive capacities."

Publishers Weekly calls the work "lively and engaging ...  Hertenstein offers much material to ponder and suggests that we embrace the power of these tools for helping us predict behavior, though he also cautions against an overly prescriptive use of these approaches, which could lead to harmful cultural stereotypes."

Daniel Pink, author of Drive: The Surprising Truth About What Motivates Us, and former speechwriter for Vice President Al Gore, states, "In this fascinating book, 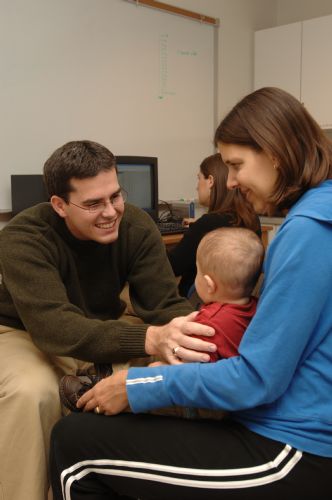 Matthew Hertenstein unpacks the secrets of our predictive abilities and shows how we can hone those abilities to become better judges of people and situations. The Tell is one of the year’s essential reads."

Learn more about the book at Amazon.com or Barnes & Noble.com.

Research by Professor Hertenstein and his students on smiling in yearbook photos and whether subjects became divorced later in life received worldwide attention in the spring of 2009. The findings were initially published in the journal Motivation and Emotion. Coverage began in British media outlets, and spread to United Press International, Yahoo! and a piece which aired April 16, 2009 on NBC's Today. The research was included in the New York Times Magazine's "Ninth Annual Year in Ideas" and was cited by India Today, New Scientist and British Columbia's Province. 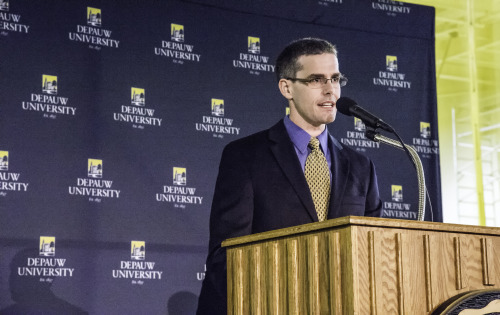 Matt Hertenstein's research on communicating through touch was featured in the April issue of O, The Oprah Magazine and Psychology Today and was the subject of a September 2010 NPR piece and an interview by ABC's Diane Sawyer, as well as an article in the New York Times. (at left: Dr. Hertenstein introducing Jane Goodall at her Ubben Lecture at DePauw; April 17, 2013)

The DePauw professor is the co-editor of The Handbook of Touch: Neuroscience, Behavioral, and Health Perspectives, published by Springer.