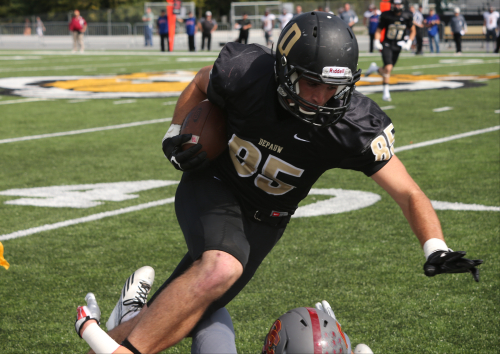 Greencastle, Ind. - After putting together one of the best offensive seasons by a DePauw receiver, senior Barry Flynn (Indianapolis/Cathedral) was voted the North Coast Athletic Conference's football Newcomer of the Year by the conference's coaches. The complete release is available here.

Flynn, who earned all-NCAC basketball honors each of the last two seasons, joined the football team for his final semester and finished with 71 receptions which rank sixth in a DePauw season and 891 receiving yards which are ninth.

Flynn's 10 touchdown catches are tied for seventh and his three scoring catches against Wooster equaled a school record. He currently leads the NCAC in receptions, is tied for the lead in TDs and is second in receiving yards. He was DePauw's lone selection to the first team.

Sansone rushed for a team-high 691 yards in nine games including a 200-yard effort in a win at Ohio Wesleyan. He also was the team's second-leading receiver with 17 catches. After moving from wide receiver to full-time tailback in week three, he averaged 95.0 rushing yards per game and 4.1 yards per carry.

Callicutt was fourth on the team with 57 total tackles including 36 solos and recorded 3.5 tackles for 11 yards in losses. He led the team with eight pass breakups and totaled one interception and recovered a fumble.