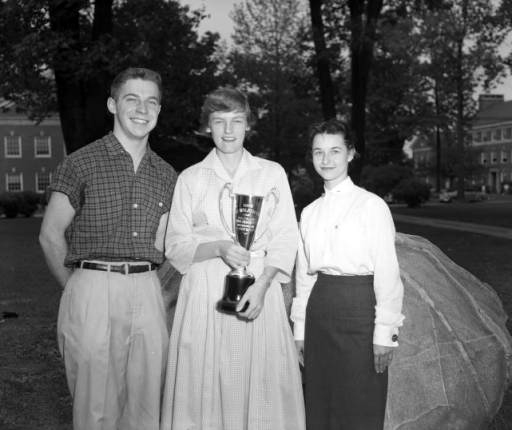 May 23, 1956, Greencastle, Ind. - DePauw University senior Margaret "Peg" Taylor is the recipient of this year's Walker Cup.  The award, which goes to the DePauw senior who has done the most for the institution over the course of their college career, was given at this morning's Recognition Chapel by President Russell J. Humbert.

The Walker Cup is named for Guy Morrison Walker, who earned an A.B. degree from DePauw in 1890, a Bachelor of Law degree in 1891, and a master's degree in 1893. A lawyer and reorganization expert, he made provision for the Walker Cup to be presented  annually to the member of the Senior Class who shall be determined to have done the most for DePauw during his or her college course.

Walker also gave funds towards an endowment which funds the Walker Horizon Lecture.