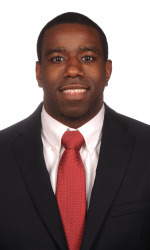 JaMarcus Shephard, wide receivers coach at Western Kentucky University and 2005 graduate of DePauw University, is taking on additional duties at WKU, according to Sports Illustrated.

"Shephard will split special teams duties with cornerbacks coach Ricky Brumfield, who assisted with special teams for the Hilltoppers this past season," notes the publication. "Shephard tied the NCAA record for kickoff return touchdowns in a single game (two) while a player a DePauw University."

Western Kentucky had an 8-5 record this past season.

A physical performance (sports medicine) major at DePauw, Shephard's undergraduate career included an internship with the NFL's Philadelphia Eagles.  On the football field he tied the NCAA record for kickoffs returned for touchdowns in a game with two and participated

in the 2005 Hula Bowl as well as the 2004 Aztec Bowl in Cancun, Mexico.  A two-time all-American, he captained both the Tiger football and track and field teams.

Shephard earned his master's degree in recreation and sport administration from Western Kentucky.