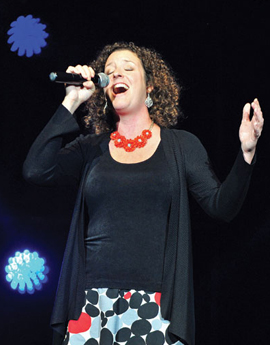 Erin M. Johnson, a music teacher for Arizona's Prescott Unified Schools and 2003 graduate of DePauw University, has been named associate director of the Prescott Pops Symphony.

Formed in 1992, the Prescott Pops is a non-profit organization of more than 70 professional, semi-professional, and amateur musicians. The mission of the orchestra is to provide the Prescott area with accessible music, which includes classical orchestral favorites, Broadway music, movie themes, and educational programs for adults and students.

"Johnson is the director of grades 6 through 8 middle school choirs, a guitar instructor for grades 7 and 8, and a general music teacher for grades K through 5," notes the Prescott Daily Courier. "She has served as principal bassoon and guest conductor for the Pops and is principal bassoon for Central Arizona Concert Band and Prescott Chamber Orchestra. A graduate of DePauw University in Greencastle, Indiana, Johnson was nominated as Yavapai County Teacher of the Year in 2011 and was recently named Prescott idol for her vocal talent."

In September, Erin Johnson sang her way to victory in the "Prescott Idol" competition.  Details can be found in this previous summary.