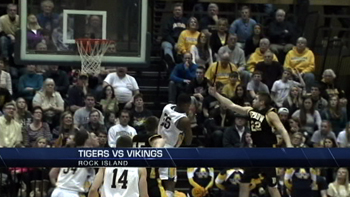 The unbelievable ending to tonight's NCAA Division III men's basketball tournament game between DePauw University and Augustana College was captured on video by Moline, Illinois ABC affiliate WQAD-TV.  Sports anchor Kody Kuffler introduced highlights of the thriller, which was played at Augustana in Rock Island, Illinois, and was won by the home team, 68-66.

A layup by Luke Lattner as time expired got stuck between the rim and the backboard, ending the Tigers' season with a 68-66 loss in the second round of the tournament.

DePauw's season ends with a 20-10 record, while sixth-ranked Augustana improved to 24-4 and will play in the round of 16 next weekend.

The segment is available at the TV station's website, and is also embedded below.

A recap of tonight's contest is available at the official online home of DePauw's men's basketball team.