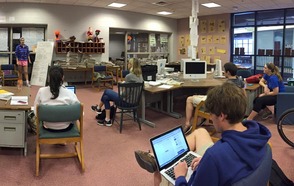 Twenty-seven members of DePauw University's student media were presented with awards at two recent ceremonies.  Fifteen staff members of Indiana's oldest college newspaper, The DePauw, were honored with 16 awards -- including eight first place citations -- by the Indiana Collegiate Press Association.  Twelve students were honored for their work by the the Indiana Associated Press Broadcasters Association, with one of the four awards being a first place prize.

The AP awards honor work which aired in 2014. WGRE competes in the local radio category, which includes commercial and non-commercial outlets. The winning entries from DePauw were: 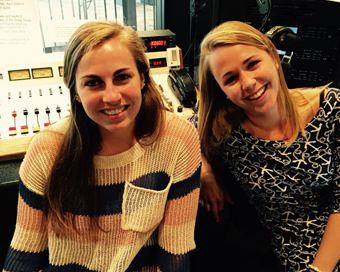 One of America's first non-commercial, educational stations, WGRE signed on the air on April 28, 1949 and today broadcasts 24 hours a day when school is in session. Jeffrey M. McCall, professor of communication at DePauw and a 1976 graduate of the University, has served as faculty adviser to the station since 1985.

The Division III category is composed of colleges with enrollment of fewer than 3,000. The faculty adviser to The DePauw in 2014 was Samuel Autman, assistant professor of English.

Founded in 1852 as Asbury Notes, The DePauw has a rich tradition of being the springboard for the careers of many of America's great journalists. Alumni of the student newspaper include Ben Solomon, video journalist for the New York Times, who is among a team of Times staffers to be honored with the Pulitzer Prize for international journalism;"business journalist of the century" Bernard Kilgore and Kenneth C. Hogate of the Wall Street Journal; James B. Stewart, Pulitzer Prize-winning former front page editor of the Wall Street Journal, bestselling author and New York Times columnist; Eugene C. and Eugene S. Pulliam of the Indianapolis Star and Central Newspapers chain; Donald Maxwell, former editor of the Chicago Tribune; Meg Kissinger, award-winning investigative health reporter for the Milwaukee Journal Sentinel; Robert Giles, former curator of the Nieman Foundation for Journalism at Harvard University and former editor of the Detroit News; Aaron Lucchetti, deputy banking editor at the Wall Street Journal; Andrew Tangel, transportation reporter for the Journal; John McWethy, former ABC News Senior Pentagon Correspondent; and Douglas Frantz, a Pulitzer Prize-winning former investigative journalist and author, currently serving as Assistant Secretary of State for Public Affairs. The paper is completely independent, and staffed and managed entirely by students. (photo: a member of The DePauw staff at work in 1936)