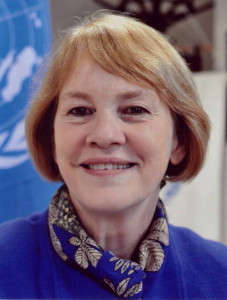 Karen Koning AbuZayd, former commissioner-general of the United Nations Relief and Works Agency for Palestine Refugees and 1963 graduate of DePauw University, will speak May 2 at the Ursuline Center in Canfield, Ohio.  Her speech, "From Sarajevo to Syria -- the Horror & Hope for Refugees" will begin at 10 a.m.

"The board of directors and staff of the Ursuline Center value the expansion of our network of relationships and outreach, not only in our valley, but globally," said Sister Nancy Dawson, executive director of the Ursuline Center. "The presentation by Karen Koning AbuZayd contributes to this expansion as she shares some of the plights and hopes for refugees."

Karen Koning AbuZayd received a bachelor's degree in nursing from DePauw in 1963, and a master's in Islamic Studies from McGill University. In June 2005, she was appointed by UN Secretary-General Kofi Annan to lead the United Nations Relief and Works Agency, described as "the main source of support for Palestinian refugees for the past 55 years." She held the post until her retirement in January 2010. From 2000-05, AbuZayd was an assistant secretary-general of the United Nations, appointed to the post of deputy commissioner-general of the UNRWA. Prior to that, she worked for the Office of the United Nations High Commissioner for Refugees for 19 years. She began her humanitarian career in Sudan in 1981, dealing with Ugandan, Chadian and Ethiopian refugees fleeing from war and famine in their own countries. From Sudan she moved to Namibia in 1989 to help coordinate the return of apartheid era refugees, a successful repatriation operation which led to elections and independence. A year later the Liberian civil war erupted and AbuZayd moved to Sierra Leone to head the United Nations High Commissioner for Refugees' (UNHCR) office in Freetown, initiating a new emergency response, that of settling 100,000 Liberians in 600 villages along the Liberian/Sierra Leone border.

From 1991-93 in UNHCR's Geneva headquarters, AbuZayd directed the South African repatriation operation and the Kenya-Somali cross-border operation. She left Geneva to go to Sarajevo as chief of mission for two years during the Bosnian war. Four 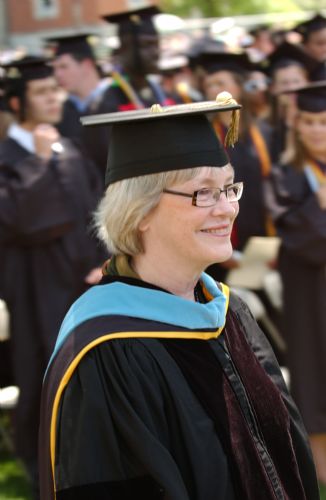 million displaced and war-affected people were kept alive by UNHCR's airlift and convoy activities, while thousands more were protected from ethnic cleansing by a UNHCR presence. AbuZayd also served as Chef de Cabinet to High Commissioner Sadako Ogata and as regional representative for the United States and Caribbean, where she focused on funding, public information and the legal issues of asylum-seekers.

In her early career, Karen AbuZayd lectured in political science and Islamic studies at Makerere University in Kampala, Uganda, and at Juba University in southern Sudan.

Karen Koning AbuZayd presented the commencement address at her alma mater in May 2007. She told graduates that DePauw "provided me with a foundation for a life of service," adding,

[Download Video: "DePauw's Impact" - 504kb] "The DePauw environment gave me a thirst for knowledge, along with a penchant to question conventional wisdom with healthy skepticism.  It was here on this campus that the universally powerful precept about treating all human beings with genuine respect was confirmed for me."