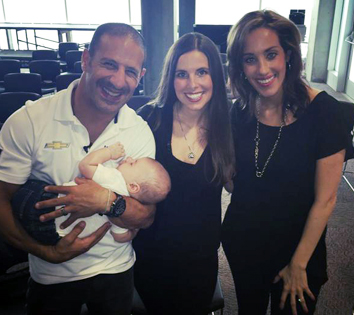 "It is always worth saying how much we love being here," says Lauren Bohlander. The 2004 DePauw University graduate and her husband, IndyCar driver Tony Kanaan, are in Indianapolis for the May 25th Indianapolis 500.  The couple is featured in a story which aired on Fox affiliate WXIN-TV. [photo, l-r: Tony Kanaan (holding Deco), Lauren Bohlander and Nicole Pence]

"Tony Kanaan is going after his second win, and Kanaan will have an extra cheerleader this year," reports the station's Nicole Pence, who is a 2006 DePauw graduate. "Deco Kanaan -- Tony’s second child and first with wife Lauren Bohlander -- was born in January ... Bohlander is a Cambridge City native and graduate of DePauw University." 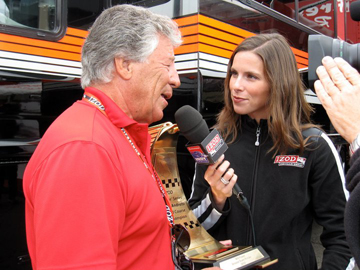