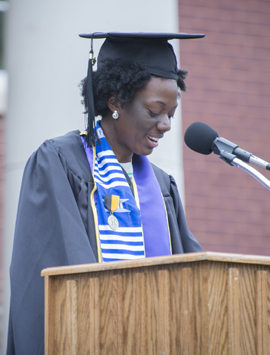 "Just like the roots of trees in a forest or the seams of a blanket, our stories have been intricately woven and tied together during our time at DePauw," Ashton T. Johnson told fellow members of the University's Class of 2015 at today's 176th commencement. "Your story has been shaped and molded by the interactions, conversations, and time spent with professors, classmates, acquaintances, friends, opponents, adversaries, and even those haters."

As the winner of the Walker Cup, which is awarded to the senior who has contributed the most to the University community during his or her four years on campus, Johnson spoke on behalf of her class. A sociology major and education studies minor, she organized events and discussions on campus to discuss and explore issues related to police, race and the state of America in the wake of the unrest in Ferguson, Missouri, and other American cities.

DePauw awarded diplomas to 504 students this morning in ceremonies that were held under cloudy skies in Holton Memorial Quadrangle.  Weather 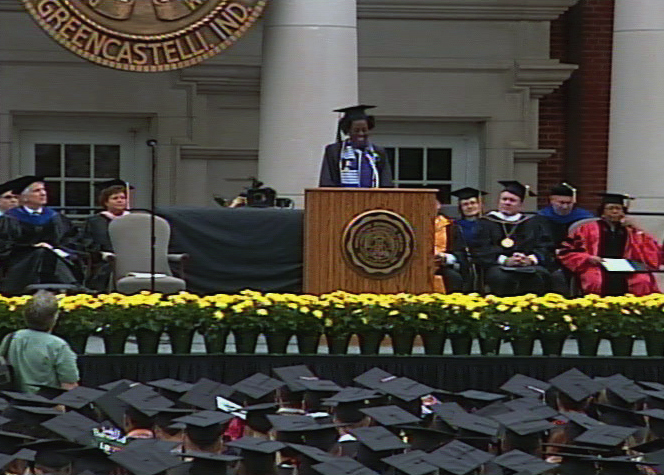 conditions appeared to be touch-and-go before the 10:30 a.m. start, but umbrellas didn't need to be employed during the two hour program.

"Our DePauw story has been shaped by the people in your classes who opened up and shared their personal stories of strengths and vulnerabilities in order to create something truly remarkable: communion. The people living in your dorm, your duplex, or your Greek house shaped your story in redefining the true meaning of home. All of our extracurricular activities, clubs, and community service organizations shaped our DePauw story by teaching us to excel in our efforts of helping others and to exalt the praises of our communities." She added, "Each person you have encountered during these past four years is not only a part of your DePauw story but also a part of your life story."

Johnson continued, "Telling your story assists you on your journey of figuring out who you are. In telling your tale, you are recalling your past and the past of those who came before you. You are reminded that your strengths, weaknesses, triumphs, and failures are all a part of who you are today. By sharing your narrative, you are becoming a part of other people’s stories. You are being intricately connected with and imprinting yourself in the lives and memoirs of people around you. 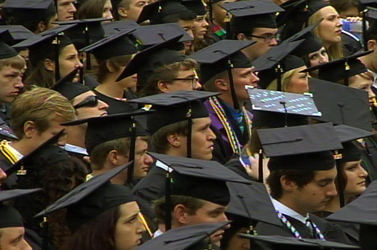 By proclaiming your story, you are declaring that you exist in this world and that your life matters. Since your life is woven into the lives around you, those lives, in turn, matter as well."

Following graduation, Ashton Johnson will serve in the Teach For America corps in New York City. 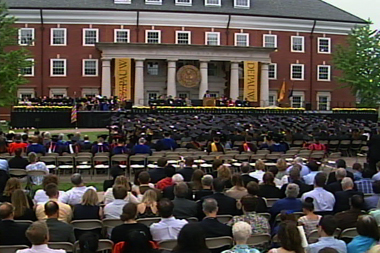 Ruth J. Simmons, president emerita of Brown University, also spoke to the Class of 2015 today.  A summary of her remarks will be available soon.

Graduates and their families who wish to own a high-quality, permanent video of DePauw's 2015 commencement may order a limited edition commemorative DVD. The disc, which is professionally replicated, will include footage of each graduate receiving their DePauw diploma as well as a range of bonus materials.  They will include clips of some of the most memorable moments of the past four years, starting with the arrival of the graduating class 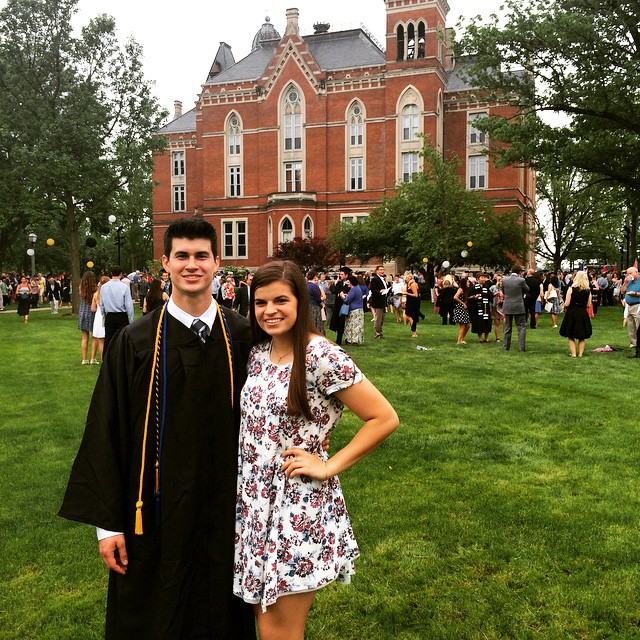 on campus in August 2011, and concluding with the May 7, 2015 "topping out" ceremony for Hoover Dining Hall.

The disc, which is now in production, will also include highlights from Ubben Lecturers who have visited DePauw over the past four years, including Bill Clinton, Martin Luther King III, Jane Goodall, Jimmy Kimmel and Andrew Luck. Orders are now being accepted at $19.95 for the first disc; additional DVDs sent to the same address will be $8 each (7% sales tax will be added to Indiana orders).