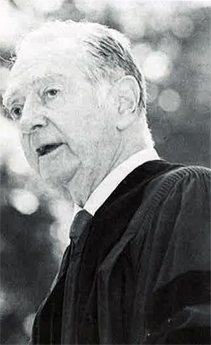 May 23, 1987, Greencastle, Ind. - "We're caught up in a huge change in the basics of life, as big as the shift from a hunting to an agricultural society; as big as the shift from agriculture to industry in the past two centuries," veteran journalist Howard K. Smith told DePauw University's Class of 1987 today.  Smith, the former anchor of the ABC Evening News, delivered the primary address at today's commencement exercises. A total of 585 undergraduates received degrees in the ceremonies, which took place on East College Lawn.

Smith, who worked 45 years in the news business, says technological changes will improve communication and transportation, and make national boundaries less important in the future.

"What this means is that we're becoming terribly intertwined -- so intertwined that we cannot go back," he said.  "We're all going to have to play by the same rules." 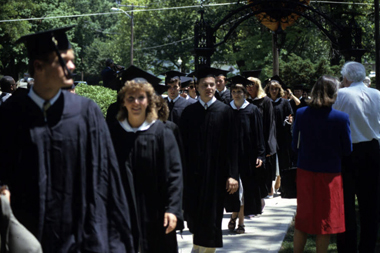 The newsman predicts that America, Japan and Europe will eventually work together on economic and political issues.  "The rest of the world will have to adjust to these three great powerhouses," according to Smith.  "It's going to mean ghat if war doesn't happen between then and now it will mean peaceful dissolution of communism."

He added, "I think what we're approaching is one world -- not for idealistic reasons, but for reasons of simple practicality."

Smith served as co-anchor of ABC Evening News for seven years. He has won virtually every important award for excellence in broadcasting, including the Peabody and an Emmy. Smith is a six-time winner of the Overseas Press Club Award for reporting and interpreting foreign affairs and was twice honored with the DuPont Commentary Award.

He told the new graduates, "If morals and ethics are to improve, you'll have to improve them."  And, of the future, he warned, "This is not a utopia I'm talking about; indeed it's likely to be very imperfect.  T 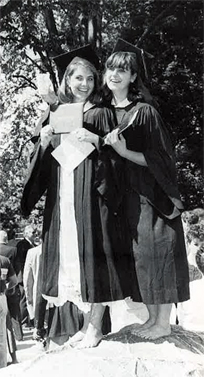 he 20th century is a good example of great material growth, but with moral horrors.  The two bloodiest, costliest wars have taken place in this century, and many nations have been run by tyrants.

Smith was also awarded an honorary doctoral degree at today's program.  Honorary degrees were also presented to: Florence Howe, founder and president of the Feminist Press; Wesley John Lyda '35, a professor of mathematics and education at major universities in Maryland, Texas, Georgia, Ohio and Indiana; Anna Johnson Julian, an executive at Julian Laboratories and Julian Associates, Inc.; Allan Wheeler Ferrin, retired executive vice president of the American Management Association and former vice president of the board of directors of Meredith Corporation; and Gertrude R. Crain, chair of the board of directors of Crain Communications.