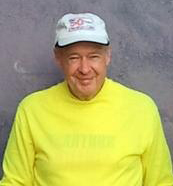 "Seven years ago the Anthony Wayne Rotary Club started an annual 5K race at Shoaff Park with all net proceeds earmarked for the fight to eradicate polio. And through the years, over $10,000 has been raised," reports the Fort Wayne News-Sentinel.  Bill Harris, an attorney and 1960 graduate of DePauw University, is co-director of the 2015 edition of the event, which is set for Saturday.

The newspaper points out that Harris contracted polio at age 12.  "I’ve been highly-motivated over the years to help in any way I can in the fight to eradicate polio," he says.

"Harris would go on to graduate from LaGrange High School (1956) and DePauw University before graduating from the University of Michigan Law School," writes Brett Hess.

Learn more about Harris -- who was a political science major and Rector Scholar at DePauw -- and the 5K at the paper's website.