Why Does Bouncing Bet Blush? 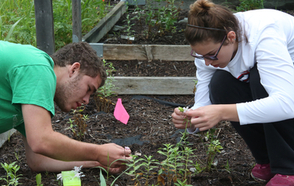 There are more than two dozen student-faculty research projects taking place on campus this summer. Biology Professor Dana A. Dudle is working with five DePauw student researchers in an ongoing collaboration with University of Indianapolis Biology Professor Sandy Davis and her students.

The project focuses on the ecology and genetics of floral color change and pollinator attraction in the perennial herb Saponaria officinalis or bouncing bet.

The students are working to determine how and why bouncing bet’s flowers turn pink. Bouncing bet is a weed – and not a particularly important one, according to Dudle.  However, the project is a kind of biological puzzle, which Dudle finds fascinating. “Figuring out the puzzle is not going to cause world peace or cure cancer, but it’s a way for us to approach a question from many different points of view,” Dudle says. 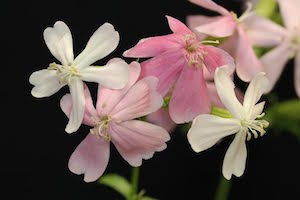 Bouncing bet flowers change from male to female during their lifetime, and at the same time, they change color. The male phase tends to be much more white than the female phase, which is pink.

The big question is  – why do the flowers change color? Does turning pink yield an advantage in terms of the plant’s ability to reproduce or survive?

In order to turn pink, the plant has to perform a series of chemical reactions that lead to the production of this pigment. “That is not a completely free process,” Dudle explains. “We are wondering how much energy the plant is devoting to making this pigment. If the plant invests a lot in being pink, then there probably should be some kind of advantage to the pigment in the flowers.” 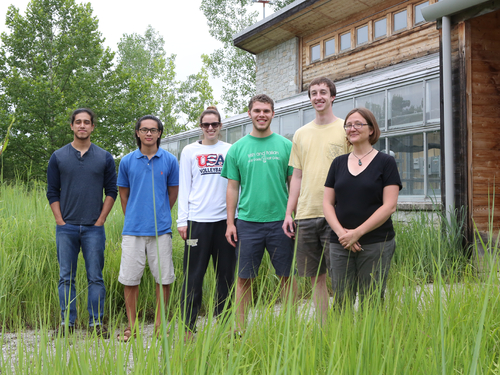 Students have taken ownership of different parts of the project, and they also work on side projects. A few students travel to the University of Indianapolis several times a week. “They are using RNA that has been extracted from the petals and trying to find the specific levels of expression of enzymes that are in the pathway toward pigment production,” Dudle says.

“If the pale petals that aren’t pink yet have many of those enzymes already present, the cost of turning pink may be fairly low,” Dudle says. “If that’s the case, we don't have such a big puzzle.”

Also, they believe that it’s the UV light that is causing the petals to turn pink. Scott P. Lockwood ’16 is actually testing that notion. He’s painting a homemade sunscreen onto the petals in the early male phase in the first day they’re open, and comparing those to flowers that he’s painting with just the oil without the sunscreen.

“We have the idea from past studies that it's UV from the sun that’s the main factor that causes the flower to turn pink,” Lockwood says. “I’m making three sunscreens to block UVA, UVB and one to block both of them. We did one small test, and it actually did work. There was a significant visual difference. The one with sunscreen was much paler,” he says. 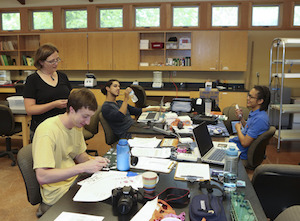 The project is focused on whether plants that are pinker have a different reproductive fate than plants that make paler flowers – genetically speaking. Students are looking at the relationship between seed production and flower color in an experimental garden. They’ve collected plants from seven different populations around Indiana, and they are growing them in one environment at the DePauw Nature Park.

They are also looking at flower color and size, and comparing the seeds produced on hand-pollinated flowers versus open-pollinated flowers to determine whether insects are attracted to these. The students predict they will see a negative relationship between how pink the flowers are and how many seeds they make. So, whiter flowers make more seeds.

Elizabeth S. Wilson ’17 and Michael B. Tobin ’16 are working on the field aspect of the project. “We're looking at the effects of a shady and sunny environment on how pink a flower gets,” Tobin says. “The females get even pinker in a sunny environment. For this project, we planted 80 different genotypes – each genetically distinct individuals in both the sun and the shade, so we have an identical version of each.”

They are looking at the extent of the variation. Some are pinker than others. “We found that fewer pollinators go to the pink flowers, so it seems maladaptive,” Tobin says. “Also, the pink flowers produce fewer seeds, which is our best metric of fitness. It’s kind of a mystery why they would want to turn pink.

“You just have to ask little questions along the way, and then eventually you get an ah-ha moment – oh, that’s why that happens,” Tobin says.

The research will continue during the fall semester and beyond, and Dudle and her students plan to present their findings at a conference this year.